Affordable real estate has been an American dream for decades. Economic policies, tax rules, credits, and special loan programs have encouraged home ownership for all Americans, and there have been some periods in which many have been able to buy starter homes, and others have been able to trade up. But there have been some cracks starting to show in the vast financial network that makes up the mortgage industry. There are some data points that indicate legitimate concerns regarding home sales and affordable real estate.

This affects retirees moving to Sequim, because if you cannot sell your home where you are now, you probably will not be able to move to Sequim and buy a home. There is some trouble on the horizon. 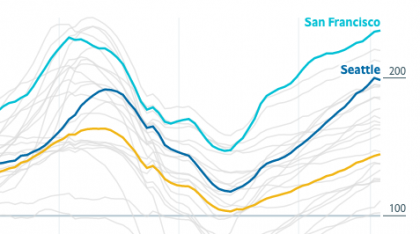 Home sales have slowed down dramatically around much of the country. [See many recent articles from around the country at Housing Market Slows Down.] In Canada, the Vancouver market has dropped a dramatic 30% in volume this past month over last year. There is a huge real estate crisis brewing in Australia and in New Zealand. China is said to be on the verge of an economic crisis. Of course, Venezuela is in a massive currency devaluation and their economy has already collapsed.

I’ve been saying for several years that interest rates are artificially low, and now suddenly mortgage interest rates have popped and are on the way up after years of historical lows. Combine this with another important long established qualification for buying a home, and we have a problem. It has long been the rule in the mortgage industry that the formula for buying a home is a price that is two to three times a person’s annual income, but because of the increase in housing prices, that formula is broken. In order for a couple to buy a home now in some parts of the country, they have to buy a home ten times their annual income. We are losing the whole concept of affordable real estate. [I recommend this video: The Looming Housing Crisis.]

Put all this together, and we see some cracks forming. Low housing inventory in some areas, prices that have continued to escalate without a commensurate increase in income, sudden increases in mortgage interest rates, the lack of affordable real estate for the entire millennial generation, and economic threats on the horizon around the world, not to mention our own debt crisis in the U.S., and we can no longer be sure that things will continue as normal. The honest answer is that things are unlikely to continue as they are.

You can see in the graphic above that Seattle home prices have nearly doubled since 1994. And in San Fransisco that increase was 154%. Millennial incomes have not kept up with these increases, and not just millennials. We are once again at a place where people cannot afford homes. I don’t have young couples buying homes in the Sequim area. My buyers are typically people with substantial net worth and a lot of equity to liquidate in their current homes elsewhere, again because prices have gone up for them. But if these buyers suddenly don’t have buyers for their homes, the music stops, and you can only hope you’re not left standing by yourself. Dreams of retiring in a place like Sequim will go “poof.”

No one knows what the future holds. Even Peter Schiff who has been forecasting an economic crash, does not know for sure. I certainly am not an alarmist, but here’s something to consider, and take this with a grain of salt. If there is one major crisis somewhere in the world, because of our interconnectedness, it is likely to create a chain reaction of events that we will all feel.

For example, a war event of any major kind would set off a series of economic consequences, including reverberations in International markets (stocks, ETFs, mutual funds, commodities, futures, currency exchanges, and so on). There would be reactionary fiscal and monetary policies, sudden shifts in national policies, and central banks around the world would re-evaluate their next move and possibly pull back for safety. Travel could be restricted and many people would just hunker down for the remainder of however long it takes to get back to normal. Buying and selling real estate would come to a screeching halt. No one wants to think about war, but the middle east clearly is poised for war. Russia, Turkey, and Iran are experiencing severe economic crisis (meaning they are getting desperate), each have military forces and equipment ready for action, and they are staunch allies in their desire to destroy Israel. On the subject of war, the world is on thin ice.

If we had a major earthquake that caused great damage in a metropolitan area, the same chain reaction of events would occur across the world and the United States. Most people do not know that earthquake activity on the ring of fire has dramatically increased. [I recommend Dutch Sinise who has a channel on Twitch.TV.]

If there was a volcanic eruption of epic proportions, the same chain reaction will affect us all. If we have a celestial event (a solar event on the sun, or a meteor event, or a shift in magnetic activity), we would see the same chain reaction. More likely than any of these would be a economic crash in China or elsewhere, and that would cause a chain reaction of catastrophic events affecting home buyers and therefore home sellers. Retirees’ plans to move to Sequim most certainly would be put on hold.

I hope and plan for the best myself, and I have many great buyer clients coming from around the country to retire and buy their dream home in Sequim. No matter what the future holds, I am absolutely convinced that Sequim is the safest and one of the best places to live anywhere in the world. I have lived in Sequim for 23 years, and I love living here. Like many others who live here, I say that I have no plans to ever move anywhere else in the world. Why would I?

I want to leave you with this thought. If you are planning to sell your home now and buy a home in the Sequim area or on the Olympic Peninsula, I would not wait too long. A gentleman was in Sequim a couple of weeks ago who just lost his home to the Redding fire. It is unknown whether he can rebuild in Redding, or whether his insurance will cover the full cost of rebuilding, and if he can and does rebuild, will anyone buy a home in the Redding area now? His dreams of retiring to Sequim may be over forever. My point is that if you have a plan you have long been dreaming of implementing, don’t wait too long. You just don’t know what the future holds.

Is Another Real Estate Crash Coming?