This morning we had our first frost in Sequim. It’s a beautiful sunny day with hardly any clouds in the sky. It was very early this morning when I heard my Sequim weather station tell me the temperature outside had reached 32 degrees. That didn’t last long. The temperature went up to 40 degrees shortly after the sun began to melt the frost on the blades of grass in my yard. 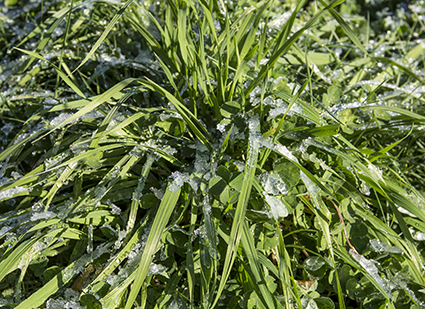 We’re in December, and it’s finally getting cold. Of course, cold for Sequim in the winter is a quick dip to freezing in the early morning hours, and so today was the first frost in Sequim. I love it. The yards and fields are all bright green as you can see in this photo above. The grass hardly grows during the coldest months of December and January, but since this is the wet time of year, the grass turns a bright green and stays that way all the way into the summer.

It’s hard to predict the precise date that will give us the first frost in Sequim. People ask me, “What are winters like in Sequim?” I usually say something like, “Which winter?,” because it seems every winter is a little different. We haven’t had snow in Sequim for three or four years. When we do get snow, it’s usually a couple of inches and melts within hours, but since we rarely see it, it is fun for a short time. With a little luck, maybe we’ll have a white Christmas.

Because our winters are mostly in the 50s, and our summers are mostly in the 60s, we have an incredibly mild climate without those darn cold extremes of the midwest or the east coast, and we don’t suffer the hot extremes of the south. I sold homes to couples from Virginia and Pennsylvania recently, and they both reminded me of how humid the heat can be on the east coast.

Our first frost in Sequim reminded me of how mild our Sequim weather really is. What a beautiful day for a walk with my dog.

Things Are Not Always What They Seem