Do People Buy Homes in Sequim in the Winter Months?

The question, “Do people buy homes in Sequim in the winter months?” came up recently, and with this recent snow, it certainly is a relevant question.  The short answer is yes, but here’s a fuller explanation of who, what, and when on the subject of buying and selling homes in Sequim during the winter with another nice graphic illustration brought to you by the research staff of Chuck Marunde. 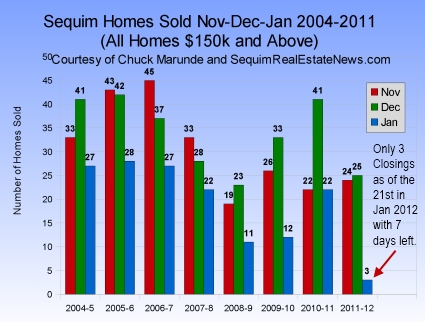 A chart like this tells its own story.  Two quick explanations are necessary.  The months are shown in the bars as consecutive months, so for example in the first grouping of bars we have November and December of 2004 plus January of 2005, which keeps the months together.  Also I only include homes that sold for $150,000 or more.  You can’t buy much for less than $200,000 in Sequim, but I included low priced homes, some of which are probably foreclosures.

This is why I consider 2005 the peak year for home sales in Sequim.  Even the peak closings in January of 2006 were the result of deals written in November and December of 2005 since most transactions close 30 to 60 days after mutual acceptance.

Homes in Sequim and January Sales

Here we are today, the 21st of January, 2012, and so far this month we only have 3 closings.  What can we make of that?  We have 7 closing days left in the month, and closings often happen near the end of the month, so we shall see.  Check back at the end of the month, because I will update the number of closings in January.  One preliminary interpretation I will share.  I would expect January of 2012 to have  low numbers for Sequim, because in the summer and fall of 2011 retirees stepped up their purchases from the prior two years.  They told me that they had put their plans on hold for the past couple of years while they waited for the economy to begin to recover and the status of their retirement funds to stabilize, but after waiting, many have decided it’s time to move on and buy a home in Sequim and retire, regardless of the uncertainty in the economy and in the world.

Now you know about homes in Sequim that are selling in the winter months.