Sequim is an agricultural community and has been for well over a century. Sequim is off the I-5 Corridor and two and one-half hours from Seattle. This is a rural area far from the hustle and bustle of the Seattle-Tacoma metropolis. The lifestyle reflects this rural backdrop and people often comment that living in Sequim is like going back in time 20 or 30 years to a time when people were friendlier, there was less crime, and there was time to pause and smell the roses. 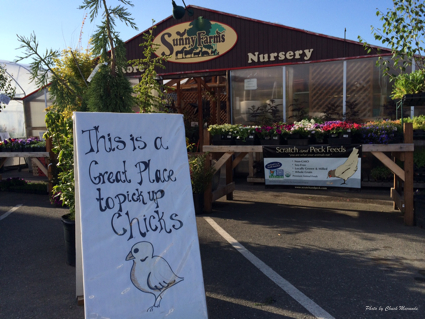 Sunny Farms is a family owned organic grocery store in Sequim that is so popular, you can almost guarantee that you will be bumping carts with other shoppers in the narrow aisles. Actually, it is much more than an organic grocery store, and you can see the nursery in this photo. The deli is also very popular, because we have so many retiree couples and singles who just want one quart of homemade soup or a special sandwich that is healthy, and Sunny Farms sells small or custom quantities of everything. The fresh organic fruit and vegetables are almost as fun to look at as they are to eat. Sunny Farms is one example of what makes the Sequim lifestyle so great.

We are very fortunate because while Sequim has a rich agricultural history, we are also a modern rural community. Sequim has become a vortex of economic activity which is seen by all the big box stores building in Sequim. For example, we have a Home Depot, Pet Depot, Office Depot, Walmart, Starbucks, Costco, Safeway, QFC, and many locally owned speciality stores. All of this is just frosting on the cake since Sequim is most famous for its Blue Hole or Rain Shadow.