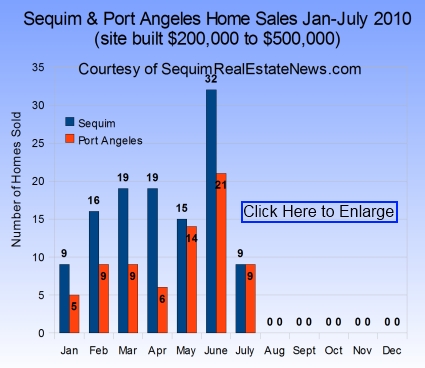 Clearly June has been the winning month, especially for Sequim with 32 homes sold and closed.  One argument for such good sales in June is that the tax credit was the big motivator, and that certainly would have been a motivator, but whether it was the main motivation is hard to say.  None of my buying clients, including three of my homes that closed in June, made their decisions based on the tax credit.  They were buying anyway, the low interest rates were a motivator, and June is typically one of the best selling months of the year.  In addition, some of the buyers in June in Sequim and Port Angeles are retirees who sold their homes back in California, Arizona, and Nevada back in March, April, or May.

Sequim Home for Sale on 10 Acres in Private Setting