I’ve compiled data on lots sold for Sequim and Port Angeles going back to 1997.  This chart tells a fascinating story.  Lot sales are a leading indicator of new construction, and lot sales are a close companion of existing home sales.  The chart shows us the peak years for lot sales, but what is surprising is how early the peak occurred in Sequim.  Most of us think of 2005 as the peak year.  The peak year for lot sales in Sequim was 2003 with 459 lots sold, and the first big year starting the retirees’ land rush to Sequim began way back in 1998.  For Port Angeles 2005 was the peak year with 333 lots sold.  What I also found interesting is that you have to go back to 1997 to see when lot sales really took off. 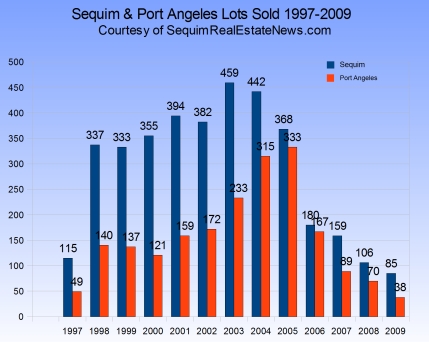 2009 Lot sales are almost the same as 1997.  How’s that for turning the clock back?  There are signs of an increase in lot sales nationally and in Clallam County, but it will take a while to thin out a large inventory of lots for sale and that means there will be price adjustments as the market finds balance again.

Sequim is Sunny and Beautiful Today