Retirees often ask about Sequim electricity rates. On the minds of many buyers is the cost of living as they get older. It’s not hard to do a budget today based on retirement income and expenses when you know what your mortgage, property taxes, homeowner’s dues, and electric bills will be when you move into your new Sequim home, at least for the first few years. But the reason retirees are asking about Sequim electricity rates is because they are planning their budget in retirement ten or twenty years from now. No one wants to run out of money when they are in their 80’s, and monthly costs like utilities must be considered. Today I want to share a tip to help you plan your budget when you buy a home in Sequim. 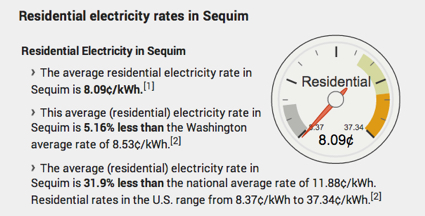 I submitted an offer on a home for clients, and as part of our due diligence, we began collecting information on all the costs associated with owning this home. That included the property taxes, homeowner’s association dues, water and sewer rates, and Sequim electricity rates. When the PUD (public utility district) told me last year’s electric bills for this home were nearly $600 in the coldest winter month, both my clients and I were surprised. Granted this is a large home with almost 4,000 square feet, but that is still way above average in the Sequim area. Most homes in this area have electric bills of $150 to $275 per month.

I pointed out to my buyers that Sequim electricity rates are very reasonable, 32% less than the national average and 5% less than the Washington state average, but the monthly cost when it is high must be a serious consideration based on the financial insight that when they are in their 80’s, Sequim electricity rates may be higher than they are now. Such high monthly electric costs are now a buying consideration for retirees.