Sequim home sales over the past year tells a story, but it’s a story that needs to be put in context, or it won’t have much meaning to most people. I’ve tracked sales for each year going back to 2012. The resulting bar chart below is fascinating. In 2012 Sequim home sales were at 123 for the whole year. This data focuses on one niche, which is Sequim home sales between $300,000 and $600,000. This is the niche most retired professionals are in when they buy a home in the Sequim area, at least most of my buyer clients. I’m also including all of Clallam County, which is primarily Sequim and Port Angeles, but includes the rural countryside, too.

See the chart above: 567 homes sold in 2018, which is surprisingly higher than 2017, even though we had so many buyers who had trouble even finding a home because of the low inventory.

In this chart below, I show all Sequim homes sold in all price ranges, and you get a picture of the market as a whole from the lowest prices to the multi-million dollar homes.

There are some apparent contradictions in the sales data when you consider what has been happening at the street level between buyers and sellers. Many buyers have had trouble finding their ideal home because the inventory of those homes has been so low and almost non-existent, at least for some buyers. Many buyers have told me they have not bought because they can’t find a home they like. And yet we have had increasing sales through 2018. How do we account for that? 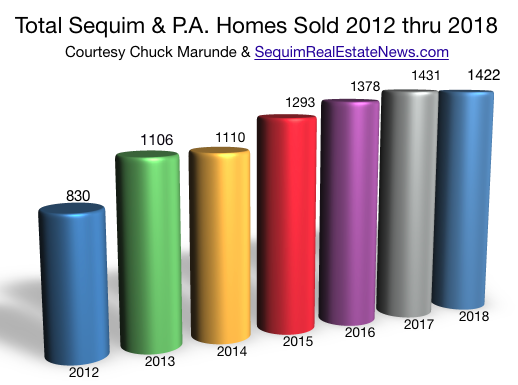 I think we can say that some retirees are willing to compromise and buy a home that falls short of their ideal. Some have decided to remodel an older home, and some have bought a home they plan to replace in a few years. That would capture some of the buyers, but what about the rest who have apparently bought homes even in a low inventory market?

We do have buyers in the wings waiting for their ideal home to show up in the Sequim MLS. The winter months always slow down slightly, and there have been a lot of things going on around the country that have caused many retirees to pause on their decision to buy a home in Sequim, but as we move into the spring and summer I think sales will begin to pick up again.

My primary niche is as a buyer’s agent helping retirees buy homes above $300,000. You can use my online Sequim MLS site, and you can email [ChuckMarunde@gmail.com] or text or call [360-775-5424] anytime for help finding your home or getting your questions answered.

Does Sequim Get Snow?