I always enjoy the drive from Sequim to Seattle, because it’s a pleasant drive and only takes about two hours and 20 minutes.  There are four ways to get to Seattle from Sequim.  One is to fly from Fairchild International Airport in Port Angeles to SeaTac.  That’s okay if you’re flying out of SeaTac.  The second way is to drive south and around the the water and north to Seattle on the other side.  We fondly call that the other side of the pond.  That’s the way I normally go, because taking the Ferries doesn’t necessarily save time.  the third way is to take the Kingston ferry to Edmonds and then drive south on I-5 to Seattle.  The fourth way is to take the Bainbridge Island ferry to downtown Seattle.  This photos was taken from the Bainbridge ferry as we approached the Seattle dock downtown.  The loading and unloading docks for large ships is shown in this photo in the quiet dark of the evening. 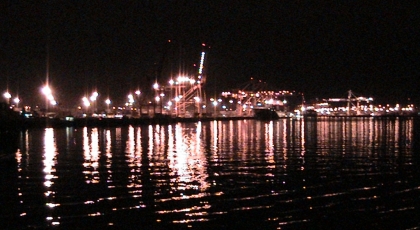 Your Sequim Home Builder and Quality