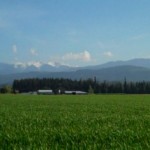 I received this question from a gentleman today, “Does Sequim, Washington really have sunny weather?  Is it all they say it is?  The answer is yes, but there is much more to the story.  I’ve written elsewhere about Sequim weather and the rain shadow or blue hole as some call it.  Perhaps the best way to answer this question is with a series of short articles I wrote on the subject of Sequim, the weather, and the retirement attraction.  People also often ask if the weather is much different in Port Angeles.  Does it rain more in Port Angeles than Sequim, and what about temperatures?

You may want to bookmark this first article, because it shows you the live temperature and weather in Sequim and Port Angeles 24/7.  The difference is not typically significant.  Sequim Weather vs. Port Angeles Weather.  And here are more articles on point.

Does it Rain in Sequim WA? ( photo with proof that it does)

Sequim WA:  The Rain Shadow (a typical afternoon of sunshine)

How Not to Sell a Home: Increase the Price