Sequim weather is a popular topic because of the famous Sequim rain shadow or blue hole.  Here is a great Sequim weather extension for the Chrome browser, which is now the fastest browser (faster than IE), and which integrates nicely with all Google services and gmail addons.

Sequim weather really is unique in the northwest, because annual precipitation in Sequim is one-third of Seattle’s, and we are just across the pond or 2.5 hours from Seattle.  See a technical explanation of Sequim Weather. 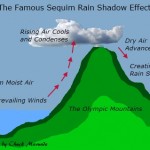 The Sequim blue hole is explained by scientist Andrew Boyd this way, “During the winter months, strong, moist west winds blow in from the Pacific. The mountains deflect those winds upward from sea level to over seven thousand feet. They’re cooled on the seventy-mile trip across the mountains; almost all the water they contain condenses out in the form of snow or rain. That’s what causes the Olympic rain forests. Then the air, now wrung out and relatively dry — makes its steep descent. Only after it passes over Sequim, does it begin taking on more water as it heads off toward Seattle.”

Majority of Sellers Largely Unfamiliar With How to Sell a Home