It’s 27 degrees in Sequim on a Sunday night, which is surprisingly cold Sequim winter weather. It’s been a few years since I think we had this kind of cold weather. The rest of the week gets quite a bit warmer, but this weekend it dropped to 19 degrees in Sequim. That is unusually cold. Thank God the rest of the week gets back to normal for Sequim winter weather in the 40’s. 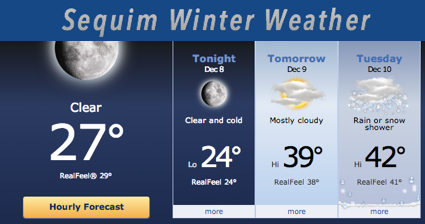 Clients ask me all the time what winters are like in Sequim, and I have to say that it depends–which winter are you talking about? Sequim winter weather tends to vary quite a bit from winter to winter. Some winters are in the 40’s and 50’s from November through January, but other winters will have a cold streak like the one we had this weekend. Some winters see no snow at all in Sequim, but other winters will bless us with several inches of snow that quickly melts, or it could last for a week or more.