Are Home Sales Up in Sequim or Port Angeles?

First, you know that it is popular in sales to claim the positive, whether it is true or not, to get people to take action.   It’s done all the time as a sales technique across America in every product line.   The sales pitch must create a sense of urgency to convince buyers that if they wait any longer, they will miss out.   By suggesting that sales are up, buyers will feel they must make that offer on a house   quickly before they lose out, before the home they want is sold, before the inventory is depleted, before interest rates go up, and so on.

Second, you must also know by now if you are a regular reader of this real estate blog (which is now the largest real estate blog in all of Sequim and Port Angeles), that I will put the truth and your interests before my own, even if it means I might not make a commission.   This blog is about telling readers the truth on all real estate issues.   So let me take on this question, “Are home sales up in Sequim and Port Angeles?”

I don’t like to shoot from the hip on such an important question, so I reviewed the homes sales reports and the MLS data on home sold and homes that have gone under contract (pending).   Here’s what I found out.

The number of homes sold in Sequim and Port Angeles in recent months and quarters is way down from past years.   That’s not a surprise, but it is important to start this analysis from the bigger picture. 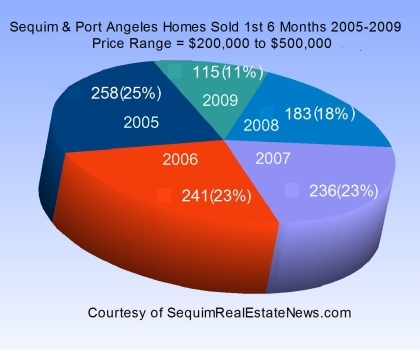 In the first six months of this year (through last month), home sales here are only 115 in this graph.   That’s not very many homes sold in a six month period for all of Sequim and Port Angeles.

So the next question is, “What about the most recent time periods.” Here is where statistics start to lose their reliability as predictive tools.   In a market where the number of homes sold is already low in comparison to past years, a small number of sales can register as statistically significant.   If only 20 homes sold in a one-week time period and the following week 22 homes sold, that represents a huge 10% leap in homes sold, and if you translate that to a quarterly or annual rate of increase, you can draw some conclusions that may outlandish.

In this following chart we can see that in recent months our home sales are only slightly better than they were in 2002. 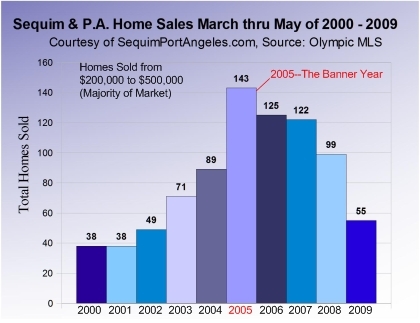 What about recent weeks?   Can we look at recent weeks and see an uptick that is statistically significant enough to say, “The market is finally on an upswing?”

On June 27th and 28th of 2009, there was a national and local open house event broadly promoted, and there were an estimated 200 local open houses during those two days.   How many homes sold as a result of the open houses and during the month of July would be very helpful to determine if this market is on an upswing. 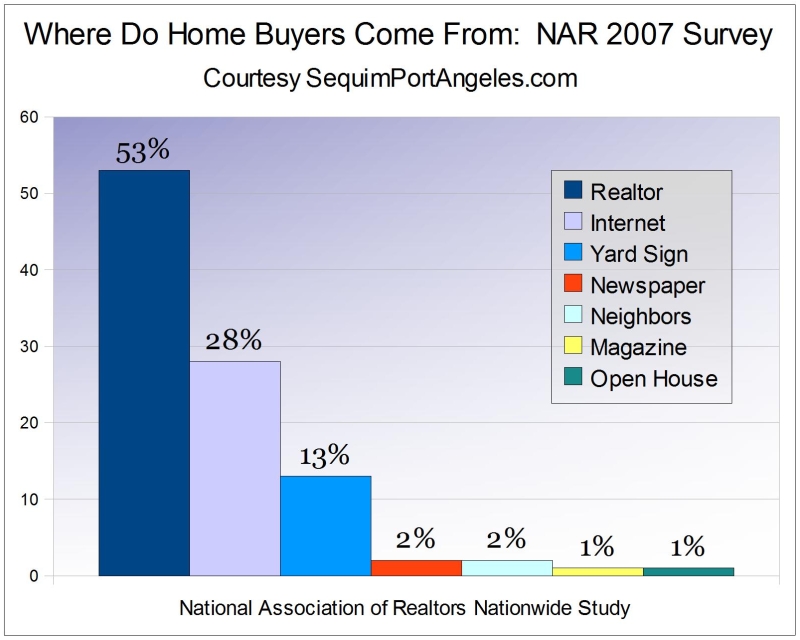 Let me say unequivocally that I think the national open house day was a great promotional strategy, and I think it was good to have all those advertisements and open houses.   It was fun.   The promotions and all the open houses served a good purpose in my opinion, whether they sold houses or not.   Now, the question is, “Did houses sell in Clallam County as a direct result of holding all those open houses?

Apparently not, although it is very hard to gather accurate data.   Here’s the data I do have.   I checked the MLS to see how many homes were under contract (pending) prior to and at the time of the open houses, and then I checked again two weeks later, which would give the parties and their agents   plenty of time to get mutual acceptance on any offers made as a result of an open house.   There were only 4 more houses under contract for all of Sequim and Port Angeles, and that does not mean they were the result of the open houses.   Even today, there are only 81 houses under contract in our MLS (the same number approximately on or about June 28th), so it would see that the open houses produced no sales, or if they did, the number is quite small (1 to 4 at most).   But the other thing this number tells us is that we don’t have any big spurt in pending transactions recently.   Some transactions will have closed and some will be new pending transactions, but 81 does not represent an increase.

The last question that has some relevance is, “Are a lot more homes suddenly closing in Sequim and Port Angeles?”

Conclusion:   The real estate market in Sequim and Port Angeles is stable, but we have not yet experienced a significant increase in sales to justify a solid prediction that our real estate market is already in recovery.   There may be a silver lining in the national uptick, because so many of our local buyers come from out of state.   If California homeowners are able to sell their homes, they are going to be ready to buy here.   Of course, there is a long lag time before we then see those buyers signing offers here.

Does this mean that a buyer should wait, or that a buyer has all the time in the world, all other things being equal?   No.   There are other factors in play here, and one of the most important factors is explained in an article I wrote entitled, “Buyers Are Cherry Picking The Best Houses.”

If you are planning to buy a home (or have one built) in Sequim or Port Angeles, and you are in a position to make your move, I recommend not waiting any longer.   But my recommendation is not based on sales tactics to get you to make a move.   It is based on my believe that three things are going to happen:   1.) housing prices are going to begin a slow climb upward in the near future, 2.) that the buyers we do have are cherry picking the best of the best, and 3.) that interest rates are almost certainly going to be climbing soon, and no so slowly.

[The immediate follow-up to this article because of a sudden increase in sales must be:   Sequim Homes Sales Step Up as well as the article immediately following that one, Sequim Weekend Sales Burst.]