Is There A Risk Of Cliff Erosion or Coastal Erosion in Sequim?

Cliff erosion is real, and you’ve got to do your research and be smart if you intend to buy a home on a high bluff in the Sequim and Port Angeles area. Here’s an example of cliff erosion on a high Sequim bluff right on the Strait of Juan de Fuca. Take a look at this Google satellite image and the distances I measured using Google. There has been tremendous cliff erosion in this area, and you can see it clearly in this image. A huge section of the bluff fell off just recently in the back yard of this home that is only about 30 feet from the cliff now. The distance from the edge of the cliff to the beach below is 175 feet. You can see the image below if you enlarge your browser. 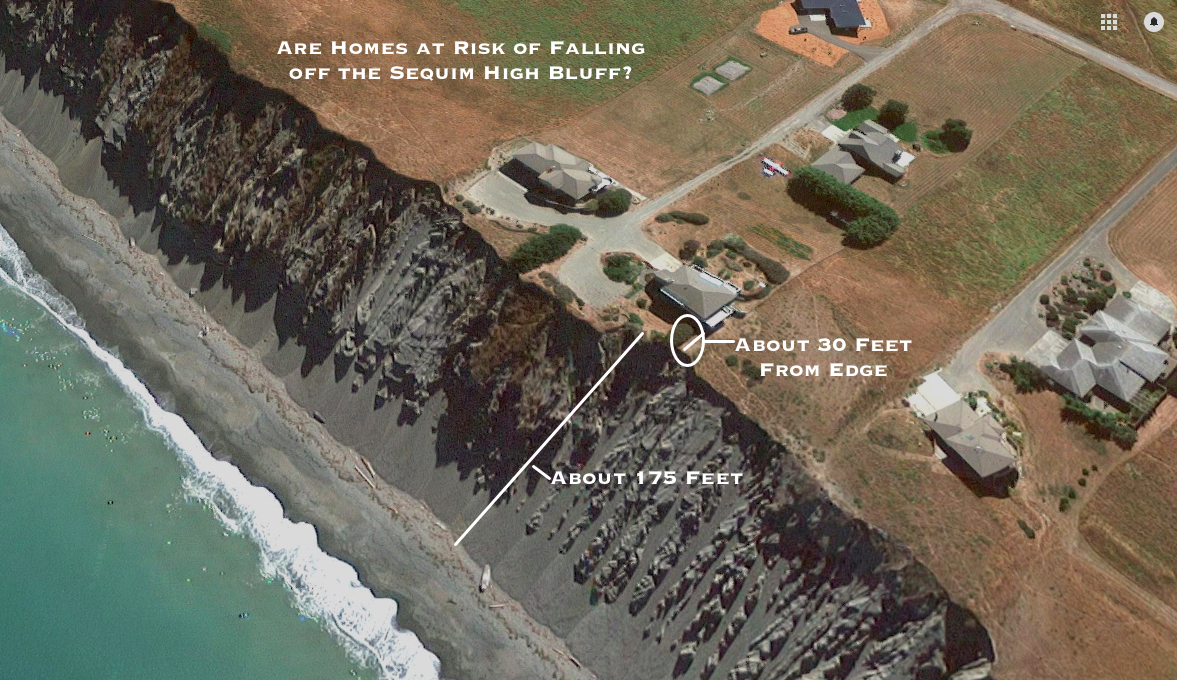 I showed this home about a month ago, but my buyer and I never went inside the home, because when we drove up the driveway and parked at the top of the cliff, we were shocked at how scary the cliff erosion was as we stood at the top looking down. When I looked at how close the cliff was to the house, which I estimated at 30 feet at the time, I figured the house was unsellable.

My thinking was simply that the rate of cliff erosion indicated that this erosion was not likely to stop exactly 30 feet from the home. It has already taken that section I marked 175 feet from the top to the bottom.

What would it take for the erosion to travel another 30 feet? Almost nothing. A wet winter with lots of water working its way through the soil to the Strait? How about more wave action and cliff erosion at the bottom of the cliff so that it peels off like it has been doing for the past decade? Or maybe a medium earthquake in the range of 5.0 to 6.0?

Apparently the recent buyers do not share my concerns about cliff erosion. I must be wrong. What say you? If you’re from California, perhaps you can share some wisdom in the comments below.

Lastly, here’s a video I took with explanations of the concerns that bluff stability engineers have in the Sequim area.

Is Another Real Estate Crash Coming?