Sequim Climate Between Nevada and Alaska 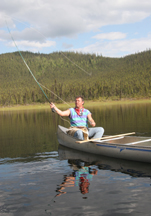 I do not miss 70 degrees below (Farenheit) in Tok, Alaska, nor the ice fog that greatly reduces visibility on the streets of Fairbanks at 50 degrees below.   We burned 10 cords of wood every winter, and guess who had the privilege of cutting and splitting the wood?   I loved it.

But there’s nothing like the in-between.   We have the Olympic Mountains, we have the rain forest, and we have sunshine down here near the water.   Talking about water, we have more beautiful water front property here than any place I lived in Alaska or Nevada.

My son, Bristol, who is a professional mixed martial arts fighter, now lives and fights in Vegas.   He called me today to tell me how nice and warm it was there, about 70 degrees.   I talked to my folks who still live in Tok, Alaska, and it was 65 degrees below.   That’s a 135 degree difference on the same day.

What was it in Sequim?   About 50 degrees, and this is winter.   Home sweet home.   You gotta love it in Sequim.

[Photo taken by Chuck Marunde at Four Mile Lake up the Taylor Highway just outside of Tok, Alaska.   The only way to the Lake from the gravel road way off the beaten path known as the Alaska Highway was to pull our canoes over moss and muskeg for about two or three miles.   We did that with four wheelers.   We caught several trout and immediately went to shore and cooked them on a grate over an open fire with a little spice my sister had with her.   Wow!   Incredible!   Anybody want to go fishing up north?]