You can compare the Sequim cost of living with the cost of living in your area.  This is a great tool, and many of my clients who decide to retire in Sequim use this online comparison website to help them decide where to retire.  Sequim is not the cheapest place in the country to live by any means, but it is one of the most stable and affordable communities.  Sequim is in high demand among retirees, and there is good reason.  When the quality of life, services, and beautiful properties are compared, Sequim comes out ahead, and now you can compare the cost of living with other areas easily with this site. 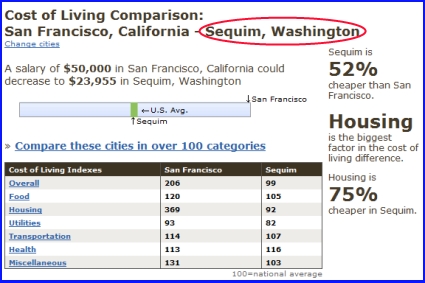 You can go to the Sequim Cost of Living Comparisons and find out how it compares to your area.  For example, comparing San Fransisco with Sequim, you can see in the results above that Sequim is 52% cheaper than San Francisco, and housing is the biggest factor.  Housing is 75% cheaper in Sequim.

Housing is not cheap in Sequim–it’s just that in some areas of California, housing is still grossly overpriced.  With all the talk of the housing recession, there are many areas of California where a basic three bedroom, two bath home is still one million dollars!  The same home in Sequim might be $250,000.  That’s 75% less than San Fransisco.

With the Sequim cost of living so much less than so many areas of the country, and with the cost of housing less than most areas, the final deciding factor for many retirees is the quality of life in Sequim.  The weather, i.e. the Rain Shadow, the short two hour drive to Seattle, the retiree community of volunteer activities, the extraordinary recreational opportunities, the fishing, boating, biking, hiking in the Olympic National Park, and so on, has created what has been published in many magazines with a title like this, “Sequim, One of the 10 Best Places to Retire.”

Compare the Sequim cost of living with your area.