Sequim crime rates are low compared to other cities around the country. There are two major reasons for that in my opinion. First, Sequim is two hours from the I-5 corridor, which means burglars are not inclined to drive this far to commit a crime. Rural areas like Sequim do have lower crime rates. 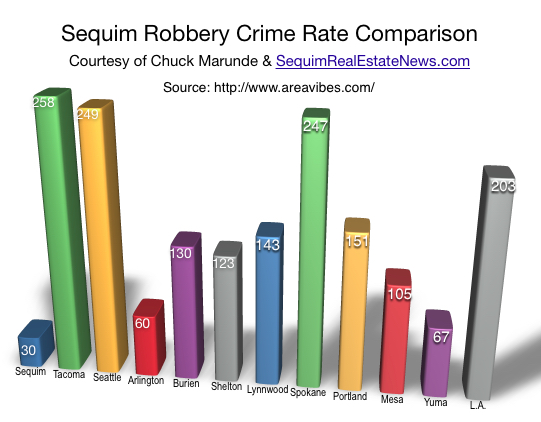 Second, the Sequim population is largely a retired population of people who have worked hard their whole lives and are some of the most incredible people you will ever meet.

My chart is focused on robberies, because robberies are one the highest areas of crime in any city. My source is a website called Areavibes.com. I wanted to include more small towns, but statistics are not available for many of them. There are many crime websites, and much of the data is not accurate, inconsistent, and scrapped from the Internet by automatic software. It is hard to find a source of reliable data that is complete in all cities used for comparison, but this data and chart show a pattern that makes the point. Sequim crime rates are very low, which also means that Sequim is a safe place to live by comparison.

The data on the Internet doesn’t do justice to the reality of how low crime rates in Sequim, not only in the city, but the surrounding area within Clallam County. I’ve lived here for 20 years, and I’ve never had anything stolen, nor do I know anyone who ever had anything stolen. Clearly robberies happen in the Sequim area, but thank God they only happen in small numbers, and typically in cases where someone left a car door unlocked, or got careless in some other way.

What you’ll find in Sequim is that the retired population consists of very friendly neighbors who watch out for each other, even when someone leaves town. They are kind, generous and friendly, and they are protective of their friends and neighborhors. Not only do we have few burglars (mostly teenage delinquents), but our population is like one big neighborhood watch 24/7.

No wonder people love living in Sequim even after decades. The Sequim crime rate is so low. [Our data source is AreaVibes. You’ll find their site very helpful.]

How Long Does it Take to Sell a Home in Sequim?