Sequim Facebook fans are reading, commenting, and generally interacting on Chuck Marunde’s Sequim Facebook page, and I hope you will join us.  It’s easy to join Facebook, and you see photos, videos, links to articles about Sequim real estate and other Sequim events, and you can participate if you want by asking questions or leaving comments.  Click on this image below, or go to http://www.facebook.com/chuck.marunde. 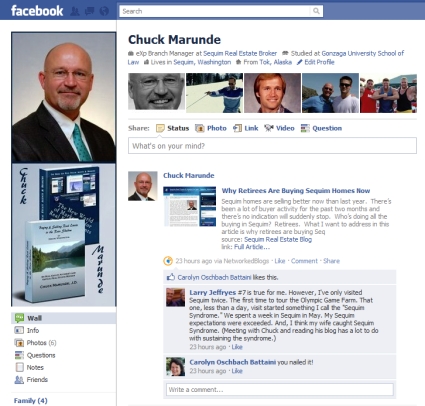 Facebook is part of the social media revolution, and Facebook now has 750 million members as the largest social media site in the world.  Interesting.  It’s a different kind of venue, and a little hard to get used to, but once you figure out the basics, it can be a lot of fun and convenient to connect with friends and family.

On this Sequim Facebook page I share links from some of my articles as well as periodic Sequim photos and Sequim events.  The other big social media sites include LinkedIn, which is number two in size, and Twitter, which is a single sentence posting tool.  Twitter is good for sending a message to the world if you are reporting a major event that needs to get broadcast quickly.  But Facebook can do that too.

In addition to this Sequim Facebook page, I have a Google+ account, which is Google’s next foray into the social media world.  In only three weeks, Google+ has amassed 10 million users, and it’s users are sharing more than one billion pieces of information daily.  Google has an advantage over Facebook because it can integrate its already massive online cloud with Gmail, Picasa, Google Docs, Google Calendar, YouTube, Google Search, Google Maps, and may others.  Google also owns the moble operating system called Android, and so Google+ will be integrated with an already massive number of users of the Android systems.  Google+ has a feature that makes a lot of sense and which Facebook lacks.  Google+ has “Circles” which are circles of friends or contacts that you can group together and then instead of seeing posts from everyone, you can see posts just from that circle.  They also have a feature called “hangouts,” which is a great way to meet with up to 10 other people on video camera.

Keep up with Sequim events.  I hope you’ll join the fun on this Sequim Facebook page.