Where are the Sequim flight paths? What if you come from southern California and find a home you love, how can you know if the home is in a major flight path near an airport you cannot see from the property? 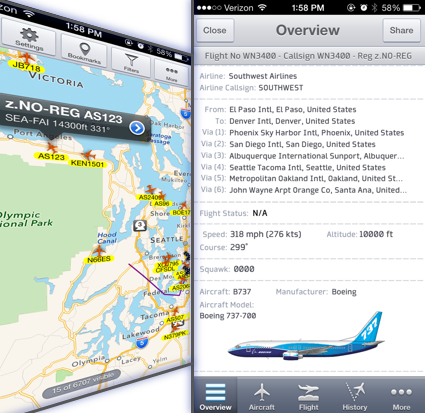 The FAA does regulate flight paths and you can find out if a property is in a flight path by going to the airport and examining a map of flight paths and minimum elevations along that flight path. Before you do that, you can benefit from a Google satellite view, which will show you exactly where the property is with respect to major airports and even small private runways.

There is a delightful $4.99 iPhone app which will track airplanes in real time from where you stand using GPS on your smartphone. The app is called Plane Finder and there are two versions. The lite version shows you the location of planes, but the paid version allows you to see all the details of the plane, including the type of plane, tail number, elevation, speed, and more. This is really a fun app, and it works anywhere in the U.S. There is also an Android app called FlightRadar24. If you’ve ever wondered where a plane high overhead is going or where it came from, now you can find out in seconds. The app doesn’t help you know precise Sequim flight paths, but it can help.

Does the Sequim Real Estate Market Slow Down During Winter Months?