Have Sequim home prices bottomed out?  There’s good news from around the country.  One of the most widely followed measures of home price changes is the S&P/Case-Shiller home price index.  It tracks price changes monthly in 20 major U.S. cities. In December, the value of homes in the 20 cities Case-Shiller measures rose by 6.8% year-over-year. 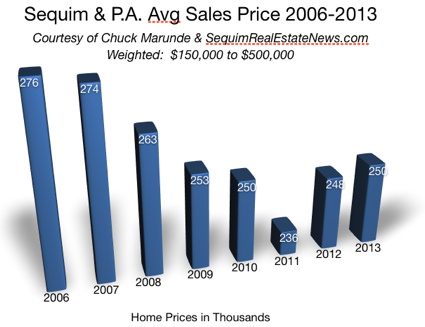 Sequim Home Prices on the Rise

I’m cautious about proclaiming a market recovery, and I’m not doing that here.  What I would suggest is that the sales data indicate we are in the second year of increasing prices.  That’s pretty solid data demonstrating that Sequim home prices are on the increase.

When Do I Make An Offer on a Home?