Sequim Homes for Sale and Selling

Of the Sequim homes for sale, how many are selling and in what price ranges, and how does Sequim homes for sale (and sold) compare to Port Angeles homes sold?  I compiled data from the Sequim MLS (the Olympic Listing Service) and created this chart comparing sales of homes in both areas.  Unlike some charts where I only include site-built homes, this data includes all categories of homes, site-built, off-site built (manufactured and mobile), condos, townhouses, and duplexes.  The bars represent sales in each price range starting with $200,000 to $299,000, and so on. 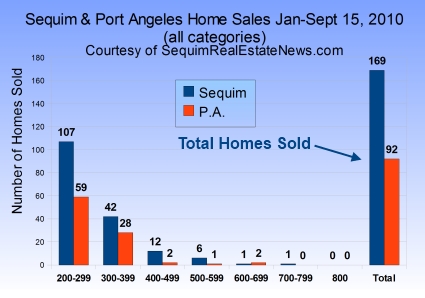 It is apparent that retirees generally prefer Sequim over Port Angeles even if it means paying a little more for their home or lot.  It’s also apparent that the vast majority of homes sold are in the price range of $200,000 to $399,000.  [I did not include homes sold under $200,000.  It’s rare that any of my retiree clients find a home below $200,000 that they want to live in for the rest of their lives without having to do major upgrades or compromise in other ways.]  In fact, this means that over 90% of all homes sold so far this year are under $400,000.

Sequim Realtor: The Letter Your Realtor Should Have Written to You (as a seller)