Sequim homes are selling at a substantially increased pace. I’ve compiled data for the first quarter of every year since 2003 to get an accurate picture of how Sequim homes sold so far in 2013 compares with past years.  Here’s a nice visual aide that makes the point better than words. 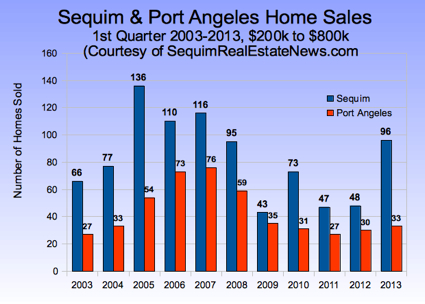 While this is generally good news for sellers, it may not be for buyers.  Some buyers are having some difficulty finding their ideal retirement home, and that is precisely because the best homes in the best areas are selling.  That segment of the inventory is shrinking.  Will this momentum in home sales continue throughout 2013?  That remains to be seen, but we certainly are off to a good start for 2013.  Sequim homes are selling in a surprisingly strong market right now.

Should I Write a Backup Offer if My Home is Already Sold and Pending?