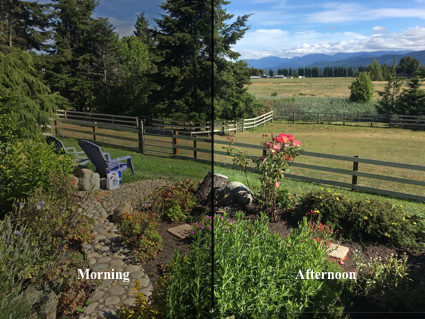 Retirees from all over the United States find Sequim when they are researching the best place to retire, and part of that decision includes the best weather, an even climate without extreme temperatures and without natural disasters. Voted one of the 10 Best Places to Retire in the U.S., Sequim keeps showing up for all those who diligently search.

I understand extreme temperatures, because I have lived in the two greatest extremes in the U.S. In Alaska I learned what 70 degrees below zero was like almost every winter, and in the summers in Nevada I learned what it felt like to work in 100 degrees in a military uniform. Sequim winters are in the 40s and 50s, and the summers are in the 60s and 70s. How sweet it is.

Whatever you are looking for in your retirement years, it’s hard to beat such an even climate and only 16 inches of rain a year, one-third the rainfall of Seattle. Sequim weather is delightful, although it’s not always sunny. Don’t tell anyone.