Snow in Sequim–Are You Serious?

Snow in Sequim is rare, but this just happened overnight! Amazing and beautiful! This is our first snow in Sequim in about four years. My dog didn’t know what it was, but he figured out he likes to lick it. Since I took this photo this morning, the sun has risen higher and the clouds have cleared, so it is now approaching 40 degrees at 10:45 in the morning. The snow may be gone by the end of the day. 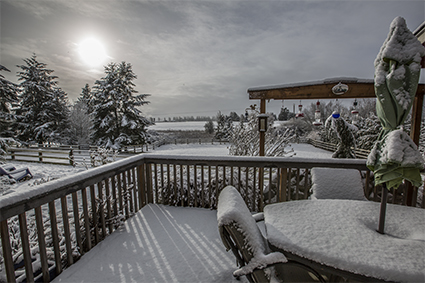 Snow in Sequim and Sledding

When there is snow in Sequim, all the kids run outside to play in it before it melts. There’s not really enough snow to sled, but some of us have sleds our kids can ride in the back yard or in the park. There are a few small hills where kids will sled for a little while before the snow melts. Robin Hill Park has a nice little sledding hill where my own children had fun.

Fortunately, when there is snow in Sequim, the highway department quickly clears the snow from the roads, although most of it just melts as soon as the sun comes out. Soft snow isn’t dangerous to drive on, because there’s decent traction on soft snow. It’s only when the snow melts and freezes or when it gets packed and icy that it gets dangerous. Your average retiree in Sequim is smart enough to just stay home until it melts on the roads. Life is safer that way when there is snow in Sequim.

How Do Reverse Mortgages Work?