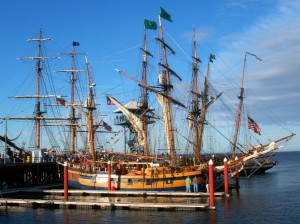 The Bounty of the 18th Century arrived in Port Angeles.   We were fortunate to have visitors from sea, replicas of 300 year old ships.

In 1787, the Deptford Naval Yard in England was commissioned to re-fit the Bethia, a collier built in 1784 (in Hull), for a voyage to Tahiti.   Tahiti was the source for the breadfruit plant, which was to be used as a cheap source of food for the workers on the sugar cane and indigo plantations in the West Indies.

The Bounty’s voyage was to last 18 months.   Joseph Banks, President of the Royal Society, enlisted David Nelson, who was the botanist and gardener at Kew, and William Bligh to oversee her refitting as a floating garden.   This set the stage for the Mutiny on the Bounty.

The Bounty was built in 1960 in Lunenburg, Nova Scotia, from the keel up by the shipwrights of Smith & Rhuland Shipyard, following the original plans in the British Naval maritime Museum.   Metro-Goldwyn-Meyer studios commissioned the ship to be built at a cost of $750,000 to star in the 1962 film Mutiny on the Bounty with Marlin Brando (Fletcher Christian) and Trevor Howard (Captain Bligh).   Work began in February of 1960 and on august 27 of that year the ship set sail to begin primary filming in Tahiti.

I’m no pirate, but as a photographer, this was a great tour.

How to Advertise a Home for Sale - Part 1