Where Do Sequim Buyers Come From? 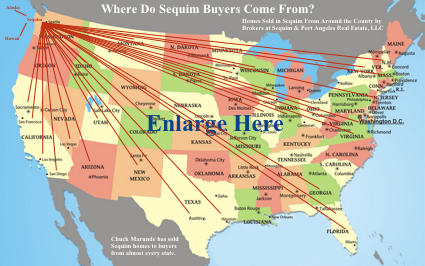 There are some states that have virtually no connection with Sequim. Kentucky, Tennessee, Missouri, Oklahoma, Arkansas, Louisiana, and Maine are states with weak or no connections at all with Sequim. But we have strong ties with California, Texas, Colorado, Nevada, Arizona, New Mexico, Alaska, Hawaii, Utah, Idaho, Montana, Florida, Illinois, Indiana, Ohio, Massachusetts, New Jersey, and the Washington D.C. area.

According to Sequim buyers from California and many southern and eastern states, they are escaping high taxes, long commutes and ugly traffic, high crime rates, temperature extremes (both hot and cold), terrible storms, natural disasters that seem to happen way too often, and now draughts. For these buyers, Sequim is the polar opposite on every single issue. No wonder so many retirees are moving to Sequim . . . and never want to leave.

Sequim Real Estate: How do I find a Home in Sequim