Forest fires have negatively effected Sequim real estate sales in the short term, and I’m referring to the massive forest fires in our southern states.  Here’s why.  The majority of buyers of Sequim real estate are retirees (or soon-to-be retirees) from several states.  Let me name the states where the majority of our buyers reside:  California, Nevada, Arizona, Colorado, New Mexico, and to a lesser extent Utah.  I track where Sequim buyers lived prior to buying their retirement home in Sequim.

Now let me name the states with massive forest fires that have destroyed thousands of homes and forced tens of thousands to evacuate their homes: California, Nevada, Arizona, Colorado, Utah, New Mexico, Montana, and Wyoming.  Sequim has a strong nexus with California, Nevada, Arizona, and Colorado.  In the past week we have seen raging fires consume homes in these states.   The Colorado Springs fire has now been called the “most destructive” in state history. 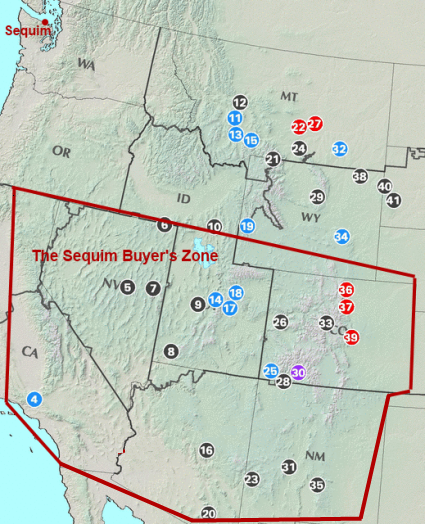 There can be no doubt that these forest fires have adversely effected the plans of thousands of people, and some of these people were planning trips to Sequim to look at homes.  Those plans are either temporarily off the table, or permanently off the table.  How many Sequim home sales have been lost?  We’ll never know, but my guess is that in the short term, Sequim will lose ten sales.  That doesn’t sound like a big number, but for ten couples who need to sell and won’t, it is significant.

There’s another perspective on how these fires will effect Sequim home sales in the future, and this was brought to my attention by Larry Jeffryes.

I think last summer’s Las Conchas fire in Los Alamos is what “pushed” Shirley to getting serious about moving to Sequim. Really! One too many fires in New Mexico. Too long a drought. Too high a fire danger – every spring, summer, and fall for the past 15 years. (Cerro Grande fire of 2000 burned 250+ homes in Los Alamos. Las Conchas fire missed Los Alamos but burned 60+ homes and 156,000 acres last summer).  P.S. My sister lives in Colorado Springs on the edge of the burn zone. Her home was spared but the mountains have been changed for her life time. The say it will take 150 yrs for the forest around Los Alamos to come back – if ever (due to the drought). Imagine the same will be said for the Springs.

Thank you Larry for your insight.  Forest fires may cause many retirees to look for a safe place like Sequim.  So the ultimate effect on Sequim home sales in the long run could be positive, although in the short term it will probably hurt.  We are very fortunate we don’t have a history of forest fires on the Olympic Peninsula.

How to Make a Counteroffer

A Day Looking at Homes in Sequim