From Sub-Prime to Financial Meltdown by Werner J. Beier 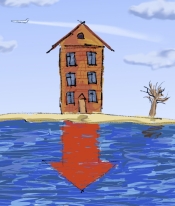 Initial news reports of the â€œsub-prime problem,â€ it seems, were only publicized recently. Suddenly we are in the middle of a financial meltdown of historic proportions: failures of AIG, Lehman Brothers, and Washington Mutual, despite a $700 Billion government bailout, and a fear in the market as hasnâ€™t been experienced since the 1929 crash.

Explanations are complicated by irresponsible reporting by financial news networks, politicians seeking election, re-election, or who are just plain finger pointing, and the Administration. Are we over-complicating the problems and the solutions? What caused the problem and why did it go so far? Despite the far-reaching nature of any national issue, problems and solutions can frequently be analyzed and posed in very simple terms, and, although these analyses may need to expand with the increasing quantity and quality of the data, there are some basic issues.

I believe there is fault in several areas: Wall Street initiated the ever increasing bundling of â€œsub-primeâ€ mortgages into Collateralized Debt Obligations (CDOs) or similar instruments via a demand for higher returns. Financial institutions devise ways of initiating mortgages to borrowers (qualified or not) to place them into houses, affordable only by means of â€œspecialâ€ mortgage programs, which will re-price at some future market rate; the re-price date occurs and suddenly these borrowers are unable to pay at the level demanded by the re-pricing. The financial institutions foreclose on the loans, CDOs cash flow dries up, and suddenly there are failures, bankruptcies, and a liquidity shortage of epic proportions throughout the financial system. The regulatory agencies, who are reviewing banks and other related financial institutions, fail to perceive a problem and sit on the sidelines until foreclosures reach up to thousands per day, if the news reports are to be believed. The news networks, financial and otherwise, trumpet the problems to all who will listen, only exacerbating the fear and panic throughout the market and the country. It is one thing to report a problem, but then to beat it into the ground with every talking head available does nothing to calm the widespread panic. One news network had a â€œtalking headâ€ who said the market will drop to 8,000 â€“ next day it was at 7,961.

Underlying analysis for any loan begins with the borrowerâ€™s ability to repay (cash flow). Financial institution underwriters/analysts are trained to have two repayment sources, primary and secondary. The primary should be the borrowerâ€™s cash flow through salary, wages, investment income, business investments, etc., and the secondary generally is the liquidation of the collateral if the borrower fails in his obligation to repay. The primary repayment via cash flow is the source of the return for the investors in CDOs based on mortgages. During the re-pricing phase, where the borrowersâ€™ mortgages went from, say $500 per month, to maybe $1200 per month without appreciable change in repayment cash flow, there was a sudden bump in the road.

Without the primary repayment from the borrowers, financial institutions and mortgage holders traditionally look to foreclosure and sale of the underlying asset (your home) to repay the notes. Foreclosing on a property instantly devalues it by eliminating the cash flow from it and foreclosing on hundreds or thousands across the country devalues assets of those homeowners who actually continue to pay as agreed. Large mortgage institutions like Washington Mutual then have a liquidity crunch, deteriorated asset portfolio and become unable to operate. While this was going on, (one might say, â€œmeanwhile back at the ranchâ€), the FDIC and other regulators acted as stunned as any other on-looker while thousands of foreclosures occurred and destroyed the people the regulators were supposed to protect.

Finally, now that it is too late for most people, the government is directing financial institutions to work with borrowers. What a novel conceptâ€”work with the borrower to keep the cash flow going, albeit at a reduced flow! These assets would need to be written down but NOT off! Cash flow would have continued and possibly saved institutional failuresâ€”maybe not, but weâ€™ll never know, will we? If the majority of those people who could pay some reasonable amount had been allowed to do so and stay in their homes, how much less would the write-offs have been? Could this scenario been avoided? I believe it could have with original thinking instead of traditional blundering, stronger more decisive response by regulators instead of spectatorship, less yellow journalism by the mediaâ€”instead, taking a more proactive and positive stance, and finally, less greed!

The greed of Wall Street for returns to investors drove the packaging of high risk CDOs because the return was better than the regular â€œprime borrowersâ€ with lower risk. The sub-standard underwriting practices to produce more and satisfy the greed resulted in massive defaults under existing agreements when re-price (rate adjustment) required payments which were unsuited to the borrowersâ€™ economic circumstances. The financial institutionsâ€™execution of traditional practices by exercising the right to foreclose resulted in a massive meltdown of the housing market, deflated the values of paying mortgages, and FINALLY, also resulted in these same institutions killing the resale market by destroying their own potentially future customers who now have poor credit ratings due to the foreclosures. Consequently, they had to stop lending. Regulators stood by and watched while the Treasury Secretary orchestrated a bailout, which was then delayed by suddenly concerned politicians.

This is not to advocate 50-year mortgages, abuse lending practices, or the regulation of financial institutions; however, if ever there was a clear demonstration of the global economy, and the effects of a greed-driven environment, this is it. Governments, bankers, regulators, and news media need to exercise the power of independent thought and seek non-traditional solutions in this new, non-traditional marketplace. Things are not the same anymore and those who pose non-traditional theories should be heard and those ideas tested to determine their efficacy instead of being dismissed because they are too difficult to manage. Einstein once said, Great spirits have often encountered violent opposition from weak minds. We should strengthen our minds to allow great spirits to pose non-traditional solutions when the next potential crisis arises and perhaps such an unnecessary catastrophe might be prevented.

Einstein also said, We cannot solve problems by using the same kind of thinking we used when we created them.

Mortgage Problems at the 11th Hour

Mortgages – Turn Back The Clock

Words of Encouragement for the Real Estate Market and Economy