There is a Sequim bell curve in real estate, and after working with hundreds of buyers retiring to Sequim, that bell curve pattern has become clear.  At least 2/3rds of all retirees are looking for the same property, a single level, three bedroom, two bath home on a nice lot, preferably with a mountain or water view (but not if it costs a lot more), a nice modern kitchen, a two car garage, and not far out of town.  Anywhere from 1,800 square feet to as much as 2,600 square feet is good.  A low maintenance yard would be preferable.  Neighbors are fine as long as you have some privacy.  The more the better.  Does this all sound familiar?  Here’s what the Sequim bell curve looks like. 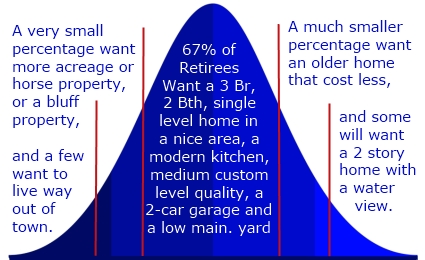 No wonder a seller with two stories, 4,000 square feet, four bedrooms and three baths on a lot with houses 20 feet on either side is having trouble selling his home.  No wonder homes from the 60’s and 70’s with vintage kitchens are not selling to the 67%.  No wonder homes on commercial streets just sit in the MLS forever.  Homes on the outer margins of the Sequim bell curve are not in high demand.

All of this is also very relevant to buyers, because the inventory of homes available for retirees in the center of this Sequim bell curve have been selling, and that means the inventory available has been shrinking.  See my previous article entitled, Sequim Home Inventory Shrinking.

I’ve been telling my buyers recently, when we find the ideal home and the listing price is reasonable, don’t dilly dally.  Draft an offer and start negotiating, because you’re in the Sequim bell curve and that means someone else is gong to buy this home if you don’t.

Tell Me About Sequim Home Sales: A Market Bottom?

How Does Seller Financing Work?