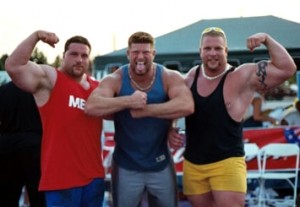 In challenging times like these, many are questioning their investments in real estate and in the stock market.   We’re all concerned about our currency, our investments, our retirement funds, and our futures.   These are legitimate concerns, but may I suggest we keep our portfolios in perspective.

My son, Jesse Marunde, was a professional strongman who came in second at the world’s strongman contest in Chengdu, China about four years ago.   Last year he died suddenly of a heart attack at the age of 27 in the gym here in Sequim.   Jesse was 6’5″ and 320 pounds of muscle.   I’m only 5’9″, and while I didn’t coach him on how to become the second strongest man in the world, I did get him started in weightlifting and athletics as a youngster.   But my contribution, if I may share, to Jesse’s life was not so much to help him with his extraordinary physical accomplishments that made him famous around the world, especially in Europe.   My focus with Jesse from the early years was helping him learn how to think clearly, how to develop a passion for life with a focus on being successful in ways that were personally fulfilling.   Jesse and I talked about everything, about what makes us tick, what successful people do and don’t do, about emotions, psychology, spiritual issues, and this life and the legacy we will leave when we are gone.   He was once asked by a college professor what made him believe he could be the strongest man in the world, and Jesse’s answer will live in my heart forever.   He replied, “Because my dad always told me I could.”

Jesse left a huge legacy.   Thousands mourned his death and thousands around the world still talk about the impact he had on their lives.   A man in his 80’s told me with tears in his eyes that Jesse saved his grandson’s life.   Jesse took the young man into his gym and began training him, but not just for physcial health.   While they trained on the weights, Jesse told him that working out and becoming strong isn’t going to change anything in his life, won’t get him off drugs, isn’t going to make him happy . . . unless he changes his lifestyle.   Jesse could be so tender and gentle when he wanted, but he also had the ability to flat out hold someone responsible for their conduct and their future in the most direct language.   Having a massive 6’5″ frame of muscle looking down into your eyes while demanding a straight answer can have an affect on a person.

Many stories have been shared about Jesse’s example and how he loved to help people.   He had a gift for breaking through to get people to take action, and many did.   Their lives will never be the same having met and worked with Jesse.   Jesse left a legacy that makes his worldly fame and success as a professional strongman pale in comparison.   Jesse was one of the world’s greatest athletes, but that is not how he will be most fondly rememberd.   That is not his legacy.   That was his currency.   His legacy is much greater and eternal.

As you and I struggle with financial concerns in these challenging times, consider what your legacy will be after you’re gone.   What will they say about you?   Are you focused on legacy or currency?

[Photo taken by Chuck Marunde at the 2003 St. Louis National Strongman Contest with Jesse in the middle.]

The Future and Vision of Port Angeles