Sequim weather is a retiree’s dream for the ideal climate and the perfect weather.  Sequim is famous for its rain shadow or blue hole, but there’s much more to a happy life than a blue hole on a warm sunny day.  The real story of Sequim weather is much better than most people realize.   I’ve been reflecting on the great suffering of so many in the midwest and the south from the violent tornadoes that give virtually no warning before they strike.  According to a report on Tornadoes in March, March 2nd of this year saw an entire month of tornadoes strike on a single day.

I received this note yesterday from a client in Georgia who is planning to move to Sequim:

Last night was a terrible night, but we have terrible nights quite often Mar-June and then it gets hot.  The weather has been an issue for me for several years now.  I can tell you that there are a lot of exhausted north Georgians this morning.  Although it didn’t make the news like Indiana, Ohio, and Kentucky, we had a long track tornado that began in Huntsville, AL. and kept going 100 or so miles to the Georgia border and then another hundred miles to the South Carolina border (mostly as a severe, rotating thunderstorm).  Along the way it completely devastated a very nice subdivision, a local airport, and other structures.  Atlanta has two very sophisticated TV channels whose equipment is better than the National Weather Service and they go on the air for 24 hours if need be.  I was awoken at two in the morning by the weather radio and one of the tv channels.  Thankfully, nothing happened. 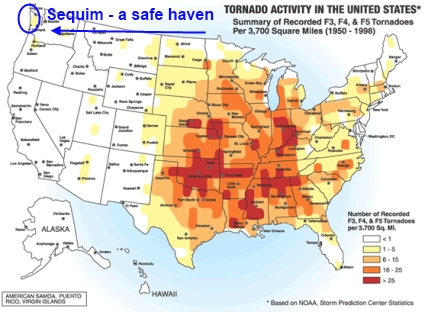 There’s no doubt that Sequim weather is safer than the storm ravaged midwest and south.  I’ve heard story after story of how people have had to start all over after losing everything, including their homes, and not just once but for some multiple times.  That is sad and my heart goes out to all those who suffer such losses.  I just wish they could live in the Sequim weather where they would never suffer such losses from natural disasters.

It’s true.  Sequim weather really is wonderful, sunny, and we only get a third of the rainfall of Seattle two hours away.  Come and check Sequim out.  You’ll love our save haven on the Olympic Peninsula as well as our Sequim weather.