Buying Real Estate in Sequim and Port Angeles is full of traps for the unwary.  Today a past client contacted me about a challenge in their neighborhood.  I sold this couple a gorgeous high bluff lot with a stunning water view of the Strait of Juan de Fuca with Victoria, B.C. across the water from them.

Here is the question I received:

Need to bend your ear for a little advise if you would be so kind.  Appears a builder named [name deleted] is about to build some homes in the culdesac that are smaller than the covenants allow.  Has the two property owners that live in the development up in arms and of course with the knowledge that I [have some experience with these things] all eyes are on me. Appears that [someone] failed to look over the plans prior to release for City permits. Anyway, if possible would like to connect for a couple just to catch up and see if you have any ideas.

And here was my answer:

Great to hear from you.  I’ve seen that scenario many times.  I’m always surprised when builders don’t do their professional due diligence and check on covenant restrictions.  I sold a lot on Marine Drive recently, and my clients planned a 2-story home to take advantage of the water view and the view of the lighthouse.  I reviewed the CC&Rs when we got the preliminary title report as part of my due diligence for my clients, and lo and behold, there was a building height restriction of 20 feet, limiting the lot to a one story home.  All the surrounding homes were two levels, and none of those homeowners knew about the restriction, and apparently none of their builders ever bothered to read the covenants.  Amazing.  So for my buyers we asked the seller to obtain a signed amendment from everyone removing that height restriction.  It took a couple of months, but we got it done. 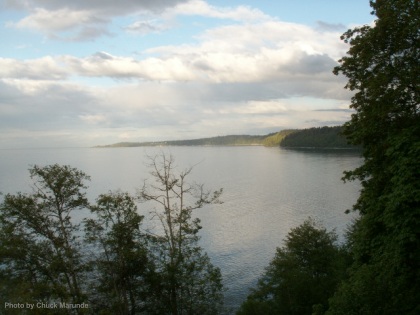 In your case, if the builder (and homeowner) are not stopped with an injunction post haste, the doctrine of waiver will take effect.  In my humble opinion, if the homes are built in violation, this will reduce the future value of all those lots, because homes of lesser architectural style and size and value will be built.  How much it would reduce the value of the other lots and homes is debatable, but the development moves slightly from a subdivision of premier luxury homes to a subdivision with a mix of average homes.  Maybe that over emphasizes the point, but it’s a valid point.

As a matter of procedure, the homeowners’ association could commence the lawsuit, or any one (or more) homeowners have the legal standing to commence the lawsuit.  Perhaps the builder would stop with a letter from you or a letter from an attorney stating that a lawsuit will be filed and construction stopped if they do not amend the plans to comply with the covenants.  If he ignores the letter, that letter could be used as part of the motion for an injunction showing how the builder blatantly ignored the covenants with reckless disregard of the rights of the homeowners even after he was put on notice.

The building department isn’t usually much help with these matters.  As I recall the building ordinance doesn’t address the issue of whether building plans breach covenants in a subdivision, so they typically defer to civil attorneys.

This is water over the dam, but this is another reason buyers should have a Realtor who knows how to do this kind of due diligence on their behalf.  Apparently the homeowners who now are trying to build homes that are in breach of the covenants did not have a Realtor who warned them about the restriction in the covenants, and obviously their own builder not only did not read the covenants, but is going to charge ahead to build homes in breach.  The builder’s actions could actually cause the homeowners to become defendants in a lawsuit, and this whole thing could cost these homeowners tens of thousands of dollars in attorney’s fees just because the Realtor and the builder didn’t do their jobs for the homeowners.  The builder’s actions will also cause the homeowners to have to hire an architect again to redesign their homes, which could also cost thousands of dollars in architecture fees, not to mention the added cost of the home for materials and labor (which adds to the builder’s profits).

Too often it’s “buyer beware” for retirees who are buying real estate in Sequim or in Port Angeles.  My clients often tell me they are glad I was a real estate attorney so I can watch their backside.

Buying a Home Out of Town