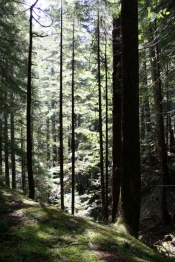 It was Saturday morning, and being Mr. Spontaneous (not!), I decided to take a hike up the trails of the National Olympic Park just a few miles west of Port Angeles, Washington.   The sun was already climbing above the tall pine trees when I parked at the base of the trail, which is about six miles into the Park up a winding narrow dirt road.

Having grown up in Alaska and spent my childhood running around in the woods in the bush community of Tok, and spending a great deal of time in the mountains of the great Alaska Range, I’m at home in the woods and mountains.   I miss watching wildlife with my father’s binoculars while perched high in the pinnacles of a mountainside.   I still remember in one sitting seeing 13 bears (grizzly and black), two moose, a caribou, a small group of Dall sheep and several lambs with a wolverine lurking in the shrubs nearby.   This was near the Tok Glacier, and it was 40 years ago.   Even then I felt the power of nature all around me.

There’s a quiet voice in nature that somehow speaks to us.   It’s the same message everywhere in the wilds, in the mountains of Alaska, Nevada, or Washington, in the dense old growth forests, or on a 32 foot fishing boat on Bristol Bay.   (I named my middle son Bristol.)   I hear the message when I dismiss all the noice and clutter of the world.

“I am as old as time itself.   I am beautiful to the eye that can see the depth and breadth of my mountains and valleys.   I am a friend who brings joy and pleasure to your life, and at the same time I am dangerous and unforgiving.   I reveal myself to you in every step you take, and I am much greater and far more awesome than your little mind can comprehend.   You see me in part, but you do not know me in full.   Enjoy me, but respect me.” 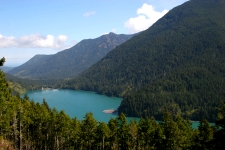 My hike into the Olympic National Park brought back a flood of memories from my childhood experience in Alaska.   Crossing creeks and balancing with my arms out as I worked across the fallen trees made me feel like a kid again.   The great big trees that are as straight and tall as any I’ve ever seen blocked most of the sunshine from reaching the moss covered vegetation below.   Still there were beams of light breaking through and creating a portrait I only wish I could capture and share with the world.

These photos are my humble attempt to capture a vignette of something much greater.   This far into the mountains I cross the Elwha River on a walking bridge before the Elwha grows big and powerful.   In a few places it crashes and churns as the elevation drops dramatically.   There’s nothing as thrilling as standing in the presence of a mighty ancient forest high in the mountains with the thunderous applause of a river beginning its long journey to the ocean.

Is it any wonder that I love living on the Northern Olympic Peninsula?