The Olympic Peninsula is an incredible place to live surrounded by the Strait of Juan de Fuca and the Pacific Ocean, and we have the Olympic National Park with old growth trees, the rain forest, and stunning beaches where couples walk hand-in-hand.  Sounds like Heaven, doesn’t it?  It is. 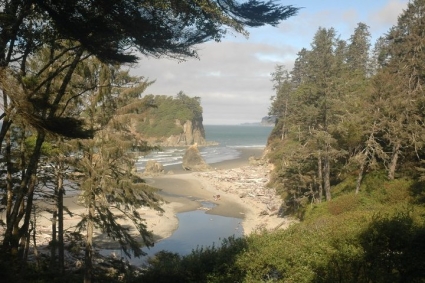 A pleasant drive around the Olympic Peninsula is a wonderful way to spend an afternoon or a Saturday or Sunday.

Most of the rain forests around the world are in warm, tropical areas, and they are typically dominated by evergreen trees that are flowering plants. But on the Olympic Peninsula you find conifers. The trees are evergreen rather than deciduous (they don’t lose all of their leaves at the same time each year).  The Olympic rain forest has abundant epiphytes (plants that live on other plants). Our rainforests are well developed in the valleys of the Bogachiel, Hoh, Queets, and Quinault Rivers.

Driving west of Port Angeles, you’ll have opportunities galore to take in the beauty of nature, walk along the beaches, and don’t forget to bring your camera.  The photo above was taken by Dan Grove.  What a fantastic photo Dan!

The Olympic National Park can be divided into three basic regions: the Pacific coastline, the Olympic Mountains, and the temperate rainforest.  You can spend all the time you want in each of these regions.  The Olympic Mountains have hiking trails that run as many miles into the mountains as you can hike, and there are some camping areas (walk-in only).  The Olympic Peninsula coastline is full of cliffs that tower 100 and 200 feet above the water, as well as beaches that gently slope into the ocean and create a stunning environment for anyone who loves nature and beauty.

So why aren’t you here?  This is an incredible time of year to walk our beaches.  Come and see the beauty and peace of the great Olympic Peninsula for yourself.

Homes for Sale That Smell