Are There Mole Hills in Sequim?

Mole hills abound in farm country, and Sequim is farm country. I rented a little farm when I first brought my family to Sequim in 1994. The 17 acre farm had little mounds of dirt lined up perfectly across the field, which I quickly learned were mole hills. If the soil is good, like it is on a farm, mole hills seem to crop up on a regular basis. No sooner do you knock one over than a new one takes it’s place in a day or two. The answer, of course, is to catch the mole. You might say, “That can’t be too hard,” and I would say after I held back my laughter, “Can’t be. Go get ’em.” 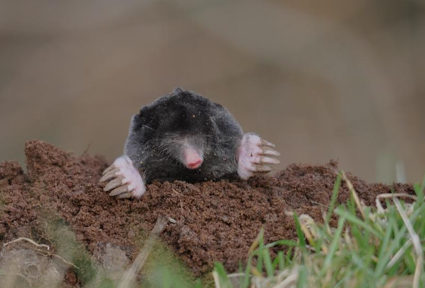 There are three types of mole traps, and various home remedies. You know how it is when your sick? Everyone is a doctor. Or if you have a legal issue, suddenly all your friends are lawyers. Well, ask anyone about how to get rid of mole hills in the country, and everyone is a mole extraction expert. I was told to insert a water hose in a mole tunnel and turn on the water. That will chase them all away. That didn’t work. I was told by a friend of a friend that a hospital employee once told him that pouring urine down a mole hole will get rid of them. Never tried that. And then there are steel traps.

I’ve tried all three metal traps, but they don’t catch moles either, unless you know the trick. I don’t have a name tag that says, “Mole Extraction Expert,” but I will share that I found one trap worked the best if used correctly. There is a little trap that you insert into a tunnel, then you cover the trap up and cover the tunnel with dirt. The best location for the trap is at an mole tunnel intersection. Yes, believe it or not, moles have tunnel intersections. The trap is a tube inside the tunnel, and with a little luck the mole will crawl into the tube and get trapped. Believe me, this is much harder than it sounds. Catching a mole in Sequim is almost an award winning event. They are either extremely smart or wary, and apparently they don’t fall for human shenanigans.

Mole hills are not the most difficult challenge you’ll face in life, but I thought you would like to know about them. If you ever see a farmer sitting in a chair out in the field with a shotgun across his lap while staring at a mole hill, you’ll know what he is up to. Trust me, he’s not likely to hurt a mole. More than likely, the worse he will do is level the mole hills with that shotgun.

Do You Want Cows or Horses or Sheep?

Sequim Farms and Horses and Cows and Sheep

Why National MLS Sites Can Mislead You

Why I Love Living in Sequim