How Far Out of Town Should I Live?

Many who plan to buy a home in Sequim reflect on how far out of town they should consider buying. Unless you want to be right in the city of Sequim, you are most likely looking at areas within a radius of 7 to 10 miles of Sequim. But how far out is too far? For example, Diamond Point is a 15 to 20 minute drive from Sequim, and Agnew is a 10 minute drive, and Mains Farm (and out by the beach and Three Crabs area) is about 10 minutes from downtown Sequim. The hills above Sequim up Palo Alto or up Lost Mountain Road can also put you 10 to 15 minutes from downtown Sequim. Is that too far out of town? I’d like to add some perspective on this issue. 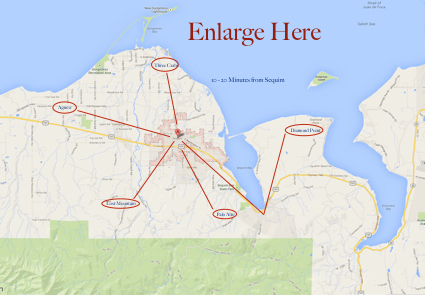 Too Far Out of Town or Not

If you grew up in rural Alaska or Montana, or if you’ve spent a career driving an hour to work every day (Los Angeles, Washington D.C., or Seattle), a 15 minute drive into Sequim will be nothing for you. But for many retirees, the humorous question becomes, “When we run out of milk, who is going to run to Safeway?” Of course, that’s one way of expressing the feeling that a home may be too far out of town. But if you live 15 minutes out of town, what is it really like going to town and how long does it take compared to living only 5 minutes from Safeway? Since Sequim doesn’t have traffic congestion or rush hour slow downs, you don’t have the same concerns you would if you lived in a metropolitan area.

Out of Town Opportunities

But if you love to run to Safeway or somewhere else in Sequim every day, then travel would be more of an issue. Most retirees don’t do that. Most plan their shopping at Costco and Safeway ahead of time, and if they go shopping twice a week in Sequim, that’s enough. In that case, living 15 minutes out of town has it’s advantages if you like privacy and some of the other benefits of living further out of town.

The Seattle Waterfront Project After The Alaskan Viaduct Removed

Why Are People Leaving California?

Multiple Offers on the Same Day

To Las Vegas From Sequim

How Shall I Live The Rest of My Life?