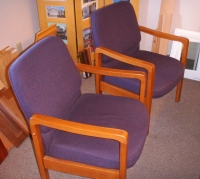 One of the popular games in Clallam County as well as around the country right now is called, “Musical Chairs With Realtors.”   It’s a game that some sellers of homes and land are playing without realizing the tragic consequences of losing.   Here’s how the game works.

An agent often cannot be certain the seller is wrong, because pricing property is not some kind of mathematical science.   It is partly objective, partly subjective, and timing is everything for the right buyer at the right time and place.   Often an agent is persuaded that a seller’s property could be listed at a price the seller is quite adamant about.   Who knows, the seller could be right.   There are not any recent sales of anything exactly like this home or lot, so it is hard to definitively prove anything to a seller that will persuade him to reduce the initial listing price.   But in so many cases, this agent can testify, as can many other agents, that sellers send strong messages that they are not to be challenged on the price.   There are many ways sellers send this message, and those of us in the business know only too well how this works.

An agent doesn’t want to be rude or offensive, and without specific mathematical proof that the listing price should be lower, it is hard to say anything real intelligent or persuasive to a passionate owner who justifies every which way up one side and down the other why this property should sell at such and such a price.   Sometimes it is just impossible to argue otherwise.   Any agent worth his salt knows that if he argues with his client, he loses.   We don’t argue with our clients.   It would be bad form and unproductive.

So the agent lists the property, but after so many months, usually three to six months, the owner has decided it’s the agent’s fault it hasn’t sold, and it’s time to try an agent that can sell it.   Granted, some sellers don’t blame the agent, but still the result is the same in that they hire another agent.   (Honestly, even though a seller may say he doesn’t blame the agent, he really does, or he wouldn’t be listing with another agent.)

And the game of Musical Chairs With Realtors begins.   The first agent notices that the new listing price with the second agent is way below the price the seller insisted he list it at.   What does the agent think?   The agent is thinking, “Wow!   Why didn’t my client list it with me at that price.   I might have been able to sell it.”   This is an entirely legitimate question.   To this some sellers would immediately reply, “Well, why didn’t you tell me it had to be listed at this lower price.   I would have reduced it and you would still have it listed.”   Not.   Experienced agents try to tell sellers a hundred times that the price may be too high, but many sellers simply refuse to hear it in all the conversations.   They don’t want to hear it, and they direct the conversation to justifying the price each time.

But it gets better!   Wait, there’s more, to parrot the famous commercial.

The second listing agent is soon to be replaced by a third listing agent, only this time at an even lower price.   Oh, this game of musical chairs is such a fun game for all of us. Who benefits?   No one.

The seller is making the job of selling his properties hard for everyone, and he is sabotaging his own goal of getting the properties sold.   The seller is also disrespecting every agent he hires and then dumps.   And worse, with his property on the market so long, he has made his own property less desirable to buyers who no longer see it, even when he keeps reducing the price.

There may be an occasion when it is appropriate to change agents.   Agents come in all different sizes and shapes, so to speak, and education, experience, competence, trustworthiness, and professionalism all play an important part to the discerning seller.   (Note the word “discerning.”)   A seller might find out that his agent is not good at marketing and sales, and with some due diligence find an agent who is.   But in the vast majority of cases from my experience, most sellers are playing musical chairs, rather than doing some deep investigation to find out who is the best.