Since most home buyers are using the Internet now, there are many old traditional forms of advertising that have fallen to the wayside.   Billboards were popular in the 1950’s and the 1960’s, and billboard companies still sold space through the 1970’s and 1980’s, although their effectiveness was steadily declining.   If you drove anywhere in the U.S. on major highways in the 1960’s you couldn’t help but see those cigarette billboards:   Marlboro, Lucky, Winston, and Camel. Today, you will still see some billboards along the highways, but they are mostly a source of advertising revenue for the large companies that own them, and few businesses waste their money on billboard advertising. They are not an effective way to advertise most businesses or professional services anymore. They are effective to point travelers to the nearest casino near a turn off.   It’s a sign of the times to see empty billboard space that cannot be sold, like this one. 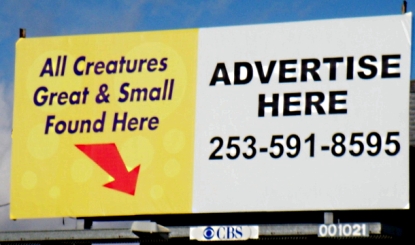