Port Townsend, Washington is a short afternoon drive from Sunny Sequim.  Buyers from California, Arizona, Nevada and elsewhere often ask me about Port Townsend.  Is it a good place to buy a house?  How do prices compare to Sequim in Clallam County?  And what is Port Townsend like? 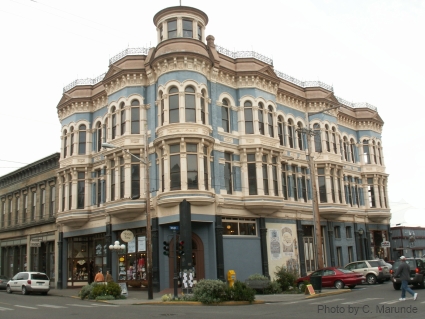 Here are a few observations about Port Townsend for what they’re worth.  I love driving on my motorcycle or car from Sequim to Port Townsend on a sunny Saturday or Sunday afternoon.  It’s about a 25 minute drive.  I took this photo while walking downtown.  Downtown Port Townsend is the quintessential waterfront town of older America.  Even the architecture makes you feel like you have gone back in time 75 years.

I love books, and Port Townsend has a number of used book stores well worth browsing.  Then there are a number of specialty clothing stores, mostly for the female population, but there is an Army Surplus store for the macho.  Downtown Port Townsend doesn’t suffer from the base degradation of the big box stores.  It truly has its own character.

Port Townsend real estate is more expensive than in Clallam County.  The average price of a home in Jefferson County is about $75,000 more than Clallam County.  I find that interesting, because the lots in and around the city of Port Townsend are not nearly as nice as in Sequim.  They are mostly odd sized and small.  The homes in the city tend to be either really cool 50 to 100 year old Victorian mansions, which no one can afford to buy, or weird two story home-made architectural designs, and every third home has a third story spiral that purports to be a ship mast with a perch to watch for whales or Moby Dick or something.  Many of these masts are unfinished.  I don’t know what that means.  Maybe that is some kind of Port Townsend code.

Walking the sidewalks downtown is an enjoyable sightseeing adventure, and the little restaurants and gourmet coffee shops are typically quite busy on a nice day.  While the town is a blast from the past, there are reminders that we are living in the 21st century.  Every time I visit Port Townsend, I have the good fortune to see all kinds, all shapes, and all colors.  Okay, I admit it:  Watching people is one of my hobbies.  But I always do a double take when I see a young female couple in their early 20’s with rings in, through, and about their head parts, holding hands and whispering sweet nothings in each other’s ears.   As my dear mother used to say, “To each his own.”

Religion.  Never mind religion.  The religious culture of Port Townsend is too complicated to describe.  I’m a simple man.  I don’t understand “Juju,” or “Ju-ju” as it is called.  Something to do with African religious power in objects.

I won’t spend much time on the politics of Port Townsend.  That’s a bit of a touchy subject for most people.  But without expressing an opinion about politics and just stating a common well known fact, sort of, Port Townsend is widely known as a liberal, green suburn of Berkley, California.  I guess that’s enough about politics.

I recommend Port Townsend, not to live in, but it’s a great place to visit on a sunny afternoon.

Why Does Port Townsend Stink?

What About Port Townsend Real Estate?