Sequim Homes for Sale: Beauty and the Beast

Yesterday I showed houses to a client from California.   We had a great day.   The sun was shining brightly without a cloud in the sky in Sequim and Port Angeles, and I always have fun looking at houses with my clients.   We toured eight houses.   For those hunting for a home here, this might be especially entertaining.

Of course my client had been using my online MLS search, and he had narrowed his search from 800 homes to less than a dozen with specific parameters, such as three bedrooms, his geographic preference, 1,800 square feet or more, and the price not to exceed $270,000, but the age of the house and the condition of the house were not limited in our MLS search by my client’s choice.

We started with the older homes as a matter of convenience in mapping out our driving route.   The first home was built in the 1920’s, and just trying to figure out where the original kitchen was located and how many additions there had been in the past 80 years was itself quite entertaining.   Once we got through the spider webs in the old slab garage, we played the game of guessing when concrete floors were added and how old the decomposing wiring actually was.   Price:   North of $230,000

The second house was built in 1913.   Touring this house was like going back in time before WWI.   Walking across the floors was an exercise in maintaining balance, since one side of the living room must have been two or three inches higher than the opposite corner.   The windows of that era were small, which meant the house did not get a lot of natural sunlight.   Staircases were narrow and steep.   I cautioned my 12-year old daughter, who came along for the fun, against bumping her head on the way down the basement stairs (and she’s only 4’9″).   Closets and the crawl space “were scary” according to my daughter.   Price:   Above $170,000 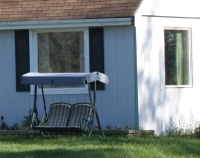 The third house was built in 1964, and like the others, was vacant.   The 1960’s were an interesting time in architecture:   dark brown panelling, small kitchens, cheap fixtures, square rooms and narrow hallways.   On top of that, the driveway was so steep, it made me nervous thinking about my car rolling down and into the living room of the house across the street.   According to my daughter, “the bathroom sinks were gross.”   Price:   Over $200,000

The fourth house was tucked in the trees and we almost didn’t see the sign.   We felt a bit uneasy walking down the walkway, which obviously had not been maintained since 1942.   But that wasn’t our greatest excitement with this house.   As soon as we entered, we immediately began to feel nauseous.   Have you ever walked into a home with the strong pungent odor of cat urine?   No sale.   Price:   Over $160,000   (Good luck selling this one!)

The fifth, sixth, and seventh houses are too boring to write about here.

The eighth house was a 1970’s style with add-ons and a makeshift apartment.   There were rooms and doors in odd places.   Apparently for someone this was the ideal home.   That someone would not be my client.   My daughter had no opinion at all on this home.   That concerned me.

At long last we arrived at a brand new home.   It was a spec home built by a builder who had kept building long after the recession started.   Everyone wondered what he was doing, building houses like it was 2005, but he had a line of credit at his bank, so he kept building.

It was a relief to walk through a home with a modern floor plan with the fresh smell of new wood and carpet.   While this home was what I would call “mid-level” quality in materials and construction, it was definitely much easier to imagine this one as home, rolling on the floors with the kids and dog, or relaxing in the bath tub off the master bedroom.   Finally, my daughter gave her nod of approaval.   How did my client feel?   This could be home.   Price:   South of $270,000.

Have you had any good entertainment lately?   Tour anyone?

Are Listings Over Priced in Port Angeles and Sequim?