The Housing Market – Recovery or Not?

Is the housing market recovering or not?  This has been a topic of conversation for several years now, and we are still discussing it.  Many retirees have told me that they don’t know if real estate prices are at a bottom, but even if they are not, they intend to live in their retirement homes for the next 10 to 20 plus years, so it doesn’t matter.  Still, we all want to invest wisely, so let’s look at the real estate market and what the future may hold. 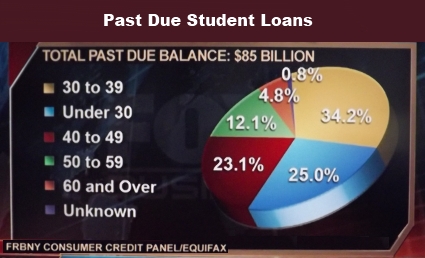 Gault said that the already slow housing recovery will be longer because of these student debts which will translate into many buyers unable to buy a home.  As this graph shows, student loan defaults have effected several age groups with the largest group (34.2%) being in the 30 to 39 age group.  Those under 30 years of age make up 25% of the student defaults.  These people will most likely not qualify for a home loan because of their defaults.

Another factor that Gault did not mention, but I see as a very large variable, is that this recession with all the young people who are out of work is destroying the credit scores for millions of young people who one day hope to buy a home.  If you combine a low credit score with tighter appraisal standards, higher loan standards, and higher down payment requirements, it is highly probable that young people who would otherwise have purchased homes in the next few years will not be able to.

Housing Market and Stay-at-Home and Rentals

Gault also pointed out that many young people are living at home with parents during this recession, and over the next few years many will be forced to rent rather than buy.  All of this will impact the real estate market because there will be less buyers, at least less young buyers.  That will hurt sellers most of all, and only create a stronger buyer’s market, as if it wasn’t already a buyer’s market.

How will this effect the Sequim housing market?  Buyers in the Sequim housing market are primarily retirees (perhaps 95%), so for the most part the student defaults will have little effect on buyers in our housing market.  However, for those retirees who are unable to sell their homes in other states because there are fewer young buyers, including those who must sell an existing home before they can buy a home in Sequim, then some sales will be lost in Sequim.

Many retirees have told me that the time for them to move to Sequim and buy a home is now, and the state of the economy and the real estate market are only two factors in their decision making process.  Many have told me they feel prices are at or near a bottom, and that interest rates are also bound to go up from here.  They are right about interest rates.  We were recently at a 50 year low when the 30 year fixed mortgage rate was under 4%, and this morning it is already up to 4.25%.  An increase in interest rates will increase both qualification requirements for buyers as well as the monthly mortgage payment.

Looking at Land in Sequim to Build a House

How Many Sequim Homes Are Under Contract Now?