Are private wells safe?  My clients often ask this question, and it’s a good question, especially if you’ve never had a private well before and you’ve always been on a public water supply.  Private wells are safer than public water systems in some ways and not as safe in other ways.  I’ll explain what I mean. 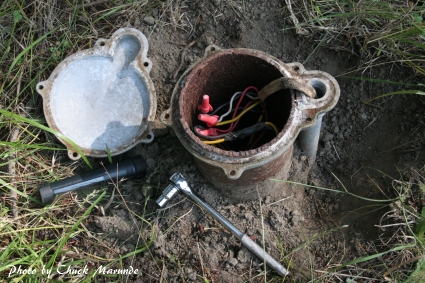 We are very fortunate that Sequim private wells generally have very good water, clean and pure.  Wells are typically 50 to 80 feet deep with water at 30 or 40 feet, and water flows of 8 to 20 gallons per minute produce more water than a family can use.  There are a few wells in the valley on the side of a mountain where water was not reached or where there is a lot of iron in the water (in the Blyn area).  Otherwise, private wells produce plenty of pure drinking water.

One of the drawbacks to using a public water system is that it is subject to pollution.  That is rare, but it has happened.  The more likely health hazard using public drinking water is the high levels of Chlorine they use.  I once heard the statement, “You don’t want to drink public water without Chlorine to kill contaminants, but you certainly don’t want to put all that Chlorine into your body.”  If you have a private well, you can keep your well pure without these concerns.

Well experts will tell you that a well head is sealed, and there is virtually no way for a private water system to get contaminated from the well itself.  It is a “closed system” as they say.  As long as the aquifer deep below the surface is not polluted from a nearby source of industrial contamination, which we don’t have in the Sequim valley anywhere that I can recall, there is no possibility of contamination.  This is good news, unless you own a well that was installed prior to 1985.  Prior to 1985, believe it or not, well heads were not sealed.  In the photo above you can see an example of a well that is pre-1985, and the well cap did not have a rubber seal of any kind.  While the cap was bolted securely on the well head, it still was not perfectly sealed, and tiny ants got in this well.  This was so rare, even the well drilling company had never heard of this happening.  It was not a major issue, because the owner simply ran the hose and the faucets in the house, and the ants got washed out of the system.  A water sample was taken and no nitrates or bacteria were found, but to be safe the well was “shocked,” meaning that Chlorine crystals were dropped in the well.  Of course, a rubber seal was installed, and the well cap put back in place.

I’ve written two other articles on private wells for your edification, including Sequim Private Wells and Well Logs and Sequim Well Inspections.  If you’re buying a lot or a home with a private well, understanding the issues of private wells is an important part of your due diligence.

Terminating Based on the Home Inspection

How Much Due Diligence Can I Do Before I Submit An Offer?

What About Sequim Wells and Sequim Septic Systems?