How Will The Downgrading of the U.S. Credit Rating Effect Real Estate?

How will the downgrading of the U.S. credit rating from triple-A to AA+ effect real estate?  Recently S&P downgraded the U.S. credit rating for the first time in history.  The reason given was the high ratio of the Federal debt to GNP, the recently passed bill to increase the Federal debt which did not reduce the debt nearly as much as financial experts say is necessary, and the political gridlock which does not bode well for the future resolution of the continuing debt crises.  But how will this effect retirees who want to retire and buy a home?

Downgrading of the U.S. Credit Rating Not Good 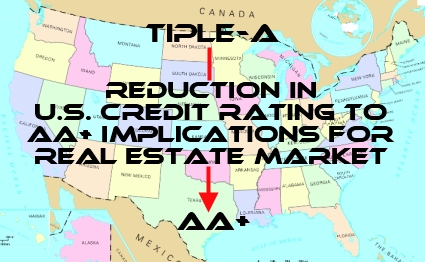 The experts are all over the map on the economic implications of the downgrading of the U.S. credit rating.  But there will be some serious consequences in my opinion.  We are already seeing violent gyrations in the stock market and in markets around the world.  The talking heads argue two opposite positions.  One is that the downgrade was justified, and the other is that it was not.  The former view seems to be the conservative perspective and the later the liberal perspective.  Regardless of your world view or your political perspective, it is very likely that this downgrading of the U.S. credit rating will reverberate throughout our economic system.

Downgrading of the U.S. Credit Rating Will Impact Real Estate

I believe the real estate market will be effected by this downgrading, and here is how.

First, retirees who have large retirement funds in the stock market will pause to take an inventory of their financial situation and the risks they are facing.  While the traditional Registered Financial Advisers will continue to argue, “Buy and hold for the long term,” one cannot help but sit up and take notice when the Dow Jones Industrial Average drops by 300 to 500 points in a single day.  At that rate it does not take long for the cumulative drop to reach a couple of thousand points.  Today the Down Jones ended the trading day down 634.76 points.  Of course, the argument is that the market will come back up.  All of this means that some retirees who are feeling the pain of mutual funds taking a hit may put their plans to buy a home on hold for a period of weeks or longer.

There is a good argument that the downgrading of the U.S. credit rating is not the major reason for the stock market decline.  It is one reason, but is not a complete explanation.  Other experts are saying that the reason for the current market decline has more to do with Wall Street and investors reacting to what they feel is the massive failure of Obama’s economic policies and the continuing growth of Federal spending that is clearly out of control.  Both parties have kicked the can down the road without resolution, and the crisis looms.

For retirees who feel financially secure, this is a buyer’s market, but whether they decide to buy a home now will depend on how they feel the downgrading of the U.S. credit rating will effect their financial future.

How to Get a Loan - Part 1 on Manufactured Homes

How to Get a Loan - Part 2 Loans on Manufactured Homes