Fishing on the Olympic Peninsula within a stone’s throw of Sequim and Port Angeles is something of a passion for many retirees.  In this photo, Don Stucker (right) and his fishing guide, Carlos Pallacio (left), look like their wives just gave birth.  Shown in the second photo is Don and Gary Grahn.  Don sums up all we need to know about their day with this, “We caught ten Steelhead, one Salmon, and three sea run Cutthroat Trout.  We released all of the fish except one that was mortally hooked.” 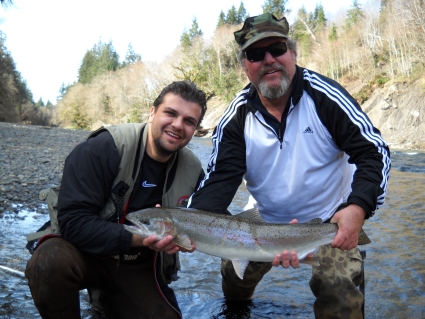 I could tell you where they were fishing, but this would probably be my last post.  Fishermen don’t tell everything, but they gladly show their trophies in the photos.  Outstanding Don!  And thanks for the photos.  When are you taking me out?