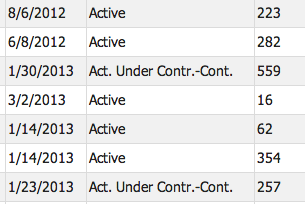 When a buyer and seller reach an agreement and sign a complete Purchase and Sale Agreement, they have reached mutual acceptance.  On the day that happens, the transaction moves from being an “Active Sequim Listing” to a “Pending Listing.”  That is the legal definition.  Attorneys refer to such a transaction as pending until it actually closes.  You would think the Sequim MLS would simply show the status as “Pending,” or that at least it would not show as still for sale, but that is not the case.

The public Sequim MLS site (the Olympic Listing Service) does not have the legal and familiar status called “Pending.”  Instead, the MLS and the subscribing Realtors have created a new status never known in the legal profession called “Active-Under-Contract” or “UCC.”  The Northwest MLS uses “Pending.”  But the status of a transaction as UCC or Pending is only visible from the Realtor’s subscription site, not the public Sequim listings site.  The public MLS site shows the transactions as still “Active.”  Why?

Why would the public side of an MLS still show Sequim listings as Active when they are legally pending?  Somewhere along the line (the real estate profession, the associations, the MLS programmers) made the decision to keep transactions available to the public even though they are pending.  Why?  Several potential reasons, none of which I think are justified.  First, there is the argument that a pending transaction may fail and end up back on the market.  That’s possible, but why not just call it pending, and if it doesn’t close, re-activate it in the MLS as active?  Second, and this is the real reason in my opinion, Realtors want to generate buyer leads, and by leaving a pending property that is sold in the Sequim listings as active will generate more buyer leads.  If you read my blog regularly, you know that I am very consumer oriented, which means absolute honesty, full disclosure, and no sales gimmicks.  So you can guess that I do not like the practice, but now you know why Sequim listings may still show up in the MLS as active even though they are sold and pending.

Here’s how my clients solve this problem.  If you’re using my Sequim MLS site, you will see that it shows listings that are in both the OLS and the NWMLS.  If the listing is in the NWMLS, my Sequim MLS site shows the NWMLS listing status as “Pending” if it is sold.  This MLS site of Sequim listings may be the only site that shows you this pending status.

But I also recommend something else for buyers.  Before you arrive in Sequim, email with me with the Sequim listings you want to see, and I will check all of them and let them know if a listing is pending so we can take it off the list of homes to view among the Sequim listings.