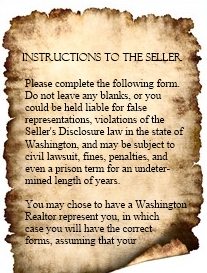 Washington real estate forms are constantly changing with additions, deletions, and new forms being added periodically.  If you are buying or selling real estate, you definitely want to be using forms that are required by state law, by your county or local jurisdiction, and you’ll most certainly want to be using forms that have been through the legal analysis and editing process for many years.

The danger in not using up-to-date forms and not using forms that have been standardized through the legal process is that you could be sued and lose on the basis of using non-standard language, or ambiguous language, or language that has been interpreted by case law to be invalid or not in your favor.  Using the correct forms is critical, and do-it-yourselfers could end up with a transaction that dies before closing, or worse yet, a transaction that closes and a year later you learn you are a defendant and must spend $40,000 on an attorney to protect yourself.  This is one of the Traps for the Unwary that I write about.

I wrote an article listing most of the standard forms that we use in Washington now, and you can see that list at What Forms Are Required to Sell or Buy Real Estate in Washington.  It’s a lengthy list.

On December 21st, the Northwest MLS (NWMLS) will publish revisions to ten existing forms and publish two new forms.  The most significant revisions are to Form 22A (Financing Addendum) and Form 22AR (Financing Contingency Notice).  Realtors who are members of the NWMLS, or who purchase the NWMLS forms have access to all of these forms, and we get the updated forms immediately as they are published.

Traps for the Unwary Buyer

Buying a Home with a Revocable Trust

Will the Seller Accept a Contingent Offer?

Due on Sale Clauses