Are There Meth Labs in Sequim?

Meth labs.  Not a popular subject.  If you read the news, periodically you’ll read about a home that was previously a meth lab that got contaminated.  Pierce and King Counties in Washington host most of these stories, but what about Sequim and Port Angeles?  The health hazard of living in a home that was contaminated with dangerous chemicals is so significant, it is worth knowing about so you can avoid this trap for the unwary when you buy a home in Sequim or Port Angeles.  Do we have meth labs in Sequim or Port Angeles? 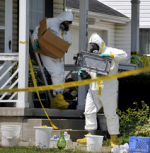 John and Jessie Bates bought a home in Suquamish, near Seattle on two acres.  Their 7-year old boy, Tyler, developed breathing problems.  John became perpetually sick and Jessie developed strange skin rashes.  The Bates family were living in a former meth lab.  There was no meth lab disclosure law in Washington in 2008, when the Bates’ bought their home. “Faced with an estimate of $90,000 for repairs, they instead chose to demolish the house and build anew — at a cost of $184,000.”  [Read the full article at Meth Rehab]

Are There Sequim Meth Labs?

No.  There have not been any Sequim meth labs that this author can find in the state records.  We are very fortunate.  Outside Port Angeles in the country there have been some meth labs identified.  In a Department of Ecology report entitled Clandestine Drug Lab and Dump Site Cleanup Activity, you can see that Clallam County is one of the safer counties in the state.

When you make an offer on a home, you’re wise to have a home inspection by a professional.  While a home inspector is not a meth lab expert, if there are signs or indicia of dangerous chemicals, he is likely to smell or recognize signs of toxic chemicals in the flooring or in the walls.  The byproduct of the cooking process creates foul odors, which often smells like rotten eggs, cat urine, ammonia, ether, or paint thinner.  Some dispose of the byproducts in the yard, and this kills off all vegetation in the area and creates black patches in the yard.

Here is a tip that can save you from buying a meth lab nightmare.  The vast majority of meth lab homes are either foreclosures, short sales on the verge of foreclosure, bank owned homes that were previously foreclosed, or government auctioned homes as a result of a criminal action.  Obviously, this does not mean all foreclosures or short sale homes are meth homes.  It does mean that meth labs are found in higher numbers in the foreclosure inventory.

Buying a home is full of traps for the unwary, and you can’t be too careful.  A wise person once said, “Surround yourself with wise counselors.”  I think that’s good advice when it comes to buying a home, too.

Buying a Home Out of Town