Deed in Lieu of Foreclosure – Will My Bank Take One?

The Deed in Lieu of foreclosure has several almost insurmountable obstacles.   The explanation is a bit involved and much more complex than this simple explanation, but here are some highlights.

Deed in Lieu of Foreclosure 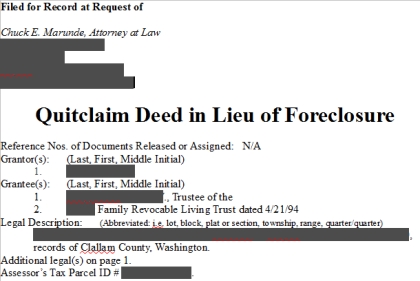 The Deed in Lieu is rarely accepted by a bank.   There are a number of complex legal and insurance issues for banks if they take a Deed in Lieu.   If a bank forecloses and they suffer a loss, they complete an application for loss with their mortgage insurance carrier, which is often HUD or some other insurer.   Banks almost never suffer a financial loss, because they get reimbursed for any loss as the result of a foreclosure.     (This is not true if the bank is local and keeps the loan in its local portfolio, but that is very rare.   Almost all bank loans are sold.)   But as I learned when I worked for Metropolitan Mortgage & Securities Company many years ago, if a bank accepts a Deed in Lieu, the same application and rules for reimbursement no longer apply, and it is much harder to prove that the bank would have sustained the same or greater loss if they had actually completed a foreclosure.   So rather than go down that risky path, banks most often choose to foreclose, and that way they know they ultimately will get all their money.   Nowhere in their calculations is there any consideration for you as the homeowner.   They make their decisions based exclusively on their income and expense sheet.

Deed in Lieu of Foreclosure and Taxes

There is another very difficult and unanswered question for you as a homeowner.   Even if the bank agreed to take a Deed in Lieu, the IRS has regulations which could hit you with a tax based on the forgiven balance of the loan.   I don’t know the precise math, but it has been argued that the IRS could consider the forgiven balance of the mortgage income in that same year, and the taxes could be horrendous.   There was discussion in this past year about the possibility of the politicians passing temporary laws that would toll those IRS regs and give people relief, but I haven’t found anyone who knows for sure how any of this has worked out in the real world.   Even accountants seem confused on these issues as to what should or could happen.

One last difficult issue is if the bank in first accepts a Deed in Lieu, they could still come after you for the loss in a civil suit, unless they agreed to sign a contract with you that they would not.   But why would a bank who holds all the cards ever agree to not come after you for any loss they sustain.   Remember, if they accept the Deed in Lieu, they suddenly owe the entire balance of the second.   The second only goes away as security on the real estate if the first forecloses and the second mortgage decides not to protect their interest by paying off the first.

By the way, if the first bank accepts a Deed in Lieu, there is no foreclosure and therefore no Trustee’s Sale.   The bank in first would literally own the property as though they were stepping into your shoes, so they would have to list it for sale, but they still owe the second, so it is a losing situation for them.

Deed in Lieu of Foreclosure Difficult

The practical course of action will be that the bank in first forecloses on the property.   They will feel they have no choice when their legal department and their loss and mitigation department flush out all the issues, just like I did here.   When they understand all this, they will simply move forward with the foreclosure.   The unanswered question is whether the bank in second will try to protect it’s interest by either making the payments on the first, which they could do, or pay off the first entirely and then foreclose themselves.   It is extremely rare that a bank in second protects its interest in this way.   They usually get foreclosed on and go lick their wounds, possibly threatening to sue you for their loss.

Banks are reticent to accept a Deed in Lieu of Foreclosure but some are.