The Sequim Air Affaire was this past weekend, and it was a huge success. A major outdoor event depends so much on good weather, especially an event with airplanes, small jets, experimental aircraft, hot air balloons, and skydivers. All around Sequim it was raining and some areas had nasty storms. Not Sequim. Seattle had nightmares with rain, wind, major power outages, and many car accidents. Fortunately, the Sequim weather cooperated nicely for the Sequim Air Affaire. Saturday sprinkled on and off, but Sunday was absolutely beautiful, and I could not resist taking this photo of one of Sequim’s classic bi-planes. 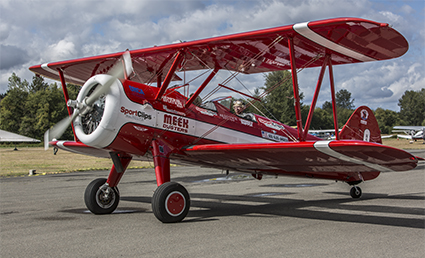 This red biplane is a 450 Stearman owned by Mike and Marilyn Mason. It is one of the most beautiful airplanes you’ll ever see. They were giving rides at the Air Affaire, and who wouldn’t want a ride in this aircraft? There are a lot of retired pilots in the Sequim area and several small airports. If you’re here next year at this time of year, you might want to join us at the Air Affaire.