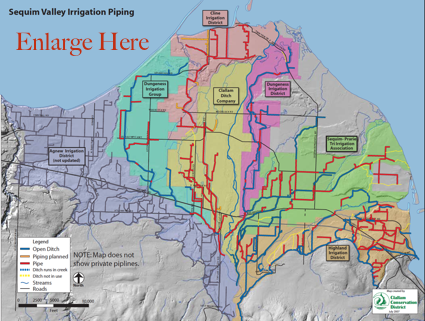 Washington has passed a new Water Management Rule, and certain areas on the Olympic Peninsula are covered by the Water Management Rule. Within this area there will be limits on how much water you can pull out of your own well, and the government intends to measure how much water is used on these private wells. Fees will be assessed for people who use more than their allotment. But properties within Sequim irrigation districts have another source of water for five months of the year. Irrigation water typically runs from May through September. If you plan to water plants or fields or an orchard or flowers or animals during those hottest months of the year, irrigation water is a life saver.

How to Find a Home: Do Not Rely On Zillow, Craigslist, Trulia, and Real Estate Portals

Another Day in Paradise: Sequim WA